Here’s the latest on Nate 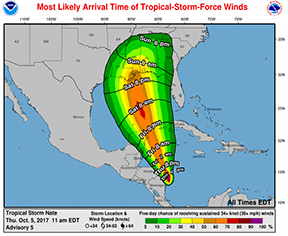 The effects of Tropical Storm Nate are expected to make its presence known late Saturday.

As of noon Thursday, Nate was centered over eastern Nicaragua and continues to move north-northwest.

It’s predicted the area will placed under a hurricane or tropical storm watch sometime Friday. As the weekend continues, forecasts are outlining 40-50 mile-per-hour winds locally. With that comes the increased chance of tornadoes.

“(But) the intensity guidance remains messy and complicated,” he said. “One somewhat positive thing about this tropical storm is that the system will be moving quite quickly across our area, potentially aiding in limiting the flood threat. I do think there will be flash flooding concerns, but long form river and creek flooding will likely be limited by this.

“There is no need to panic about this situation,” he said. “Prepare, yes; panic, no. I have the basic supplies on hand – nonperishable food items, bottled water, extra gas for the car, first aid kit, phone battery kit, etc. I would suggest you do the same! This likely won’t be a major catastrophe, but if isolated damage happens in your location, that’s a big deal for you. Keep your cell phones and tablets charged so you can get the latest info, not only from us, but from our friends at the U.S. National Weather Service Mobile Alabama.”