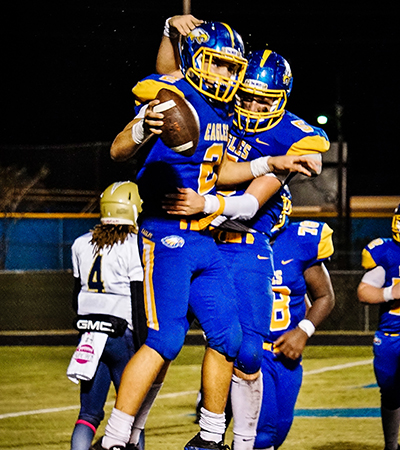 Noah Hill’s touchdown was a part of a big fourth quarter that pushed the Eagles’ to a big lead. Heather Stone | The Brewton Standard

W.S. Neal added another region win to their record Friday night, downing the Monroe County Tigers 34-14, moving the Eagles to 3-3 on the season and 2-1 in region play.

Neither team managed to score in the first quarter, with both the Eagles and the Tigers punting twice. Neal was the first to score in the second quarter, ending a 72-yard drive with a 24-yard touchdown run by senior Marvin Maddox. The PAT failed, but the Eagles were up 6-0 with 8:10 on the clock in the half.

Neal forced Monroe County to punt on their next possession, and then the Tigers intercepted a pass to end Neal’s next series but were unable to capitalize on the turnover.

Monroe County got the ball on their own 17w yard line, but aided by a delay of game call against the Tigers, an 11-yard loss forced by senior PJ Lovelace’s sack on MCHS quarterback Je’keviahn Stewart, and another loss of 5 yards forced by Neal’s defense, even a 20-yard pass completion couldn’t get the Tigers out of the hole, and they punted once more giving the Eagles the ball on their own 24 yard line with 39 seconds left in the half. Neal was unable to score before time ran out, ending the half with a 6-0 lead.

The Tigers kicked off to the Eagles to begin the third quarter, and Neal maintained possession of the ball for six minutes before a 20-yard touchdown run by Maddox and a two-point conversion run by freshman Isaac Bonam increased the Eagles’ lead to 14-0.

Monroe County answered immediately when Ty’Darius McClain turned the kickoff return into a 73-yard touchdown run. The two-point conversion was good, and with 5:39 left in the third quarter, the Tigers closed the gap to 14-8.

A 25-yard pass from junior Matthew Thomas to sophomore Taylor Fountain ended in a fumble recovered by Monroe County. The Eagles then forced a three and out and on their next series scored on a five yard run by Bonam, going up 20-8 with 12 seconds having ticked off the clock in the fourth quarter.

With a couple of sacks on the Tigers’ quarterback, the Eagles forced Monroe County into a fourth down and 27 situation and a punt. Six snaps later, and the Eagles were in the end zone again thanks to a four yard run by junior Noah Hill. Another good two-point conversion gave Neal a 28-8 lead with 7:12 to go in the fourth quarter.

Two incomplete passes and an intentional grounding call later, Monroe County trotted out their punt team once more. The Eagles needed only three snaps to score on an 11-yard run by sophomore Brendan Jenkins, increasing their lead to 34-8 with 4:56 showing on the clock in the fourth quarter.

The Tigers sustained a three and a half minute drive, finishing with a 15-yard touchdown pass from Stewart to Albert. The two-point conversion failed with 1:20 left to play. The Eagles chose to run the clock, not the ball, and ended the game by taking a knee and the win 34-14, adding a second region victory to their season.

Even though his team came away with the “W,” head coach Andro Williams felt that the Eagles are capable of playing better. “We’ve got to learn to follow our assignments. We have to learn how to practice on a high level. I have to find a way to help them be on a high level every single day. When we play on a high level we don’t make as many mistakes as we’ve made,” he commented.

On fewer penalties this week, Williams stated, “We’ve got to correct those things. We had the least we’ve had last week, but I’m anxious to see how many we had this week. I know we had one or two that cost us, especially on that touchdown run.”

Neal finished with 21 first downs while only allowing 12 for Monroe County. When the buzzer sounded to end the game, the Eagles had amassed 419 yards of total offense, 350 rushing and 69 passing to the Tigers’ 249 total yards, 160 passing and 89 rushing.

Bonam led the Eagles in rushing with 136 yards and a touchdown on 19 carries. Maddox fisnished with 85 yards and two touchdowns on 9 carries, and Hill contributed 69 yards and one touchdown with 11 touches.

Matt Hutchins led the Eagles receiving with 35 yards on one catch.The Eagles seek to increase their region standings when they face UMS Wright at home this Friday. Kickoff is at 7 p.m.