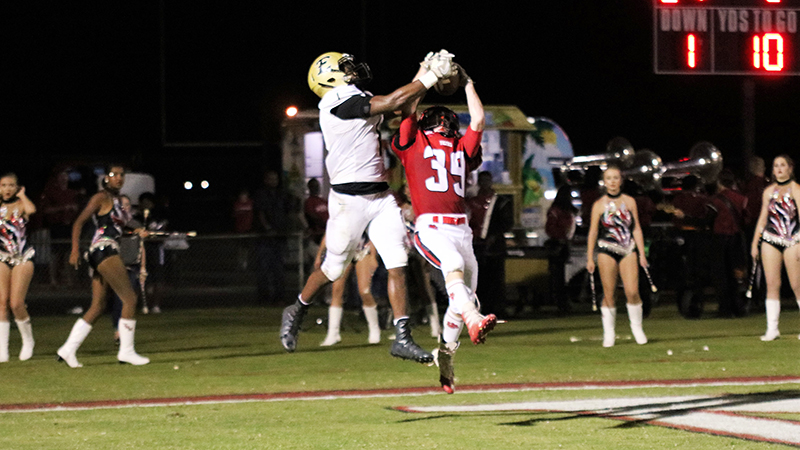 Johnson’s pick was one of four turnovers forced by TRM. Allison Terrell | For The Brewton Standard

The energy was electric at Brewton Municipal Stadium on Homecoming Friday as the Tiger defense forced four turnovers in a shutout against region opponent Excel, 35-0. The Tigers are now 4-2 overall and 3-1 in region play.

Head coach Andrew Thomas was impressed with the week’s adjustments his defense made.

“We avoided the big plays that have hurt us,” Thomas said. “We didn’t let them get behind us. With experience, the secondary is getting instinctively better playing the ball.”

The game got off to a shaky start, as Excel’s opening kickoff was fumbled by TRM and recovered by the Panthers.

Joshua Jolly connected with McMillan on a dump-off pass just minutes later that McMillan took to the house, giving TRM a 7-0 lead after a Matthew Morgan extra point.

After a three-and-out and a punt by Excel, the offensive line opened up a hole that McMillan burst through for his second touchdown, a 36-yard run. Morgan put the PAT through the uprights to give the Tigers a 14-0 lead with 5:16 left in the first quarter.

Excel started its next drive with great field position at the 50-yard line. TRM’s defense forced another punt after a penalty nullified a third and long completion.

The Tigers’ next offensive drive carried into the second quarter, before a fumble gave the ball back to Excel.

The Panthers’ drive off of the turnover backed TRM’s defense up to the Tigers’ 22-yard line, where TRM clamped down to force a turnover on downs.

Stokes Jennings connected with McMillan on the ensuing drive for a 30-yard touchdown pass that made the score 21-0 with three minutes left in the second quarter.

Hunter Johnson intercepted a pass at the end of the first half to again thwart a Panther threat in TRM territory.

The Tigers forced the third turnover on the first drive of the second half. After two third and long completions, the Tigers forced a fumble at its own 22-yard line. Jalen Walker came out of the pile with the ball to give possession to TRM.

Narkavius Campbell added more points off the turnover, with an 8-yard touchdown run that gave the Tigers a 28-0 advantage with 8:17 left in the third.

Campbell was next, the third running back to get into the end zone. After getting the ball back from a Panther punt, Campbell took a 46-yard run to the 1-yard line as time expired in the third quarter. He was rewarded to start the fourth quarter with a 1-yard touchdown, giving the eventual final score of 35-0.

Lett picked up his second interception on the ensuing Panther drive, and TRM would run the clock out from there.

Morgan was 5-5 on extra points.

Coach Thomas said he felt good about the game throughout the week.

“Our overall morale was solid after a tough game last week,” Thomas said. “Lett made some big plays for us, but we still have things to work on. We did what we needed to do this week.”

The Tigers’ defensive line gave an extraordinary effort, only allowing 16 yards rushing on the game. This played a large role in the TRM victory, as it outgained the Panthers 363-16 on the ground.

The shutout was TRM’s second of the year, and its first since week one against Opp.

The Tigers travel to Flomaton next week to take on the Hurricanes in a region matchup.