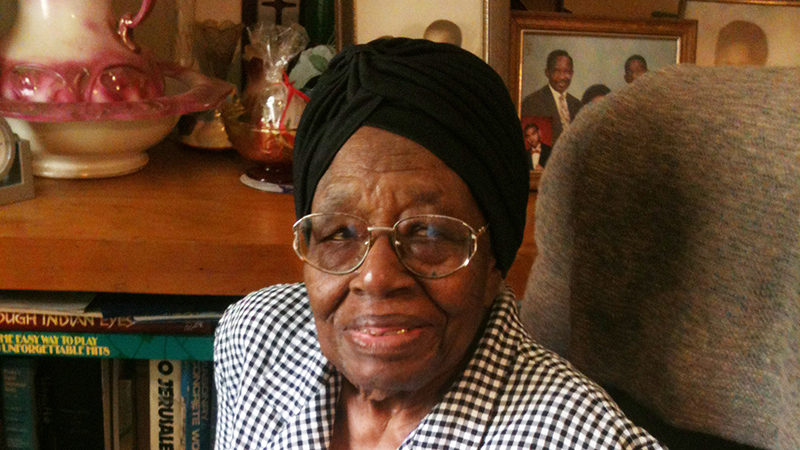 Edna Blanks has come a long way in 100 years, and she has used the years well. On Nov. 20, 2017 she will be half a century old, but she doesn’t look it. She has a little bit of arthritis, but her mind is sharp and it is clear that she is beloved of those who know her.

She doesn’t pass the time twiddling her thumbs nor does she confine herself to her home on Kerlin Street, where she lives by herself. Unless she is not feeling well, she usually takes the ECATS bus to the Senior Sail Site in East Brewton and has lunch with some of her many friends.

“I really like to go over there and I don’t miss many days,” she said. “I’ve known some of those people at the SAIL Center for many years and I enjoy going over there for a while every day. I really do love it.”

Blanks was born and raised out in the country near Mason. She graduated from Southern Normal High School in 1948. For someone who grew up in the 1920s she was ahead of her time, especially for girls. She came from a family that valued an education and she took advantage of that. After she graduated from high school, she attended Alabama A & M in Huntsville for a while working on a degree in home economics.

“I always loved to cook,” she said. “I still do and I enjoy cooking for my family and for church functions.”

Her niece, Martha Campbell, stopped by to check on her aunt and make sure she was okay. She is only one of many family members who love Blanks and keeps an eye on her. Campbell said she stops by a lot.

“I love ‘T’ and like to spend time with her,” she said. “She is the matriarch of our family.”

Blanks smiled and said everybody was so nice to her and looked after her very well.

“All these years I have served the Master and treated everyone the way I wanted to be treated,” she said. “If you serve the Lord, He will look after you.”

After spending a couple of years in Huntsville, she came back home and got a job working in the kitchen at Southern Normal. She had a place to live on campus and she said she enjoyed cooking for all those students for the next 14 years.

She also stayed active in Marietta Baptist Church during this time. She met her husband, Elbert Alfred Blanks church and they were married in 1966.

“That was when I left the Baptist Church and joined the AME Zion Fountain Church on Sowell Road,” she said. “My husband was the pastor of the church at the time and was also the pastor at AME Zion Star in Atmore.”

Her husband was also very active in the church. He was the Presiding Elder over 16 churches at the time.

Blanks said she spent a lot of time traveling as she was president of the Missionary Society for 20 years.

She lost her husband in 1975 after being married less than 10 years. She retired from district meetings in 1987 and went back to working in the school lunchrooms. She was at Oak Grove School on Pea Ridge Road, and then to W.S. Neal High School and W.S. Neal Elementary School.

“I cooked for lots of children and I loved to do it,” she said. “I still cook for my neighbors and family. When my foster mother died in 2002, her family asked me if I wanted to live in her house. I have been here for a long time.”

Her niece said that her “T” was loved by everyone and still loves to gather the family around and cook them a good meal.

“I have lived a lot of happy years,” Blanks said. It has been a good life, and I treasure it.”