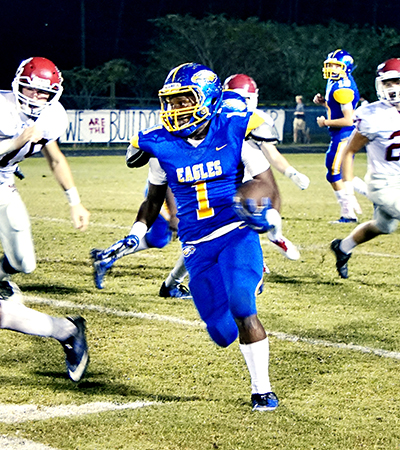 The Neal Eagles fell to UMS Wright at home Friday night, 42-17. The Bulldogs entered the arena as the number three 4a team in the state, suffering only one loss to the number one, Andalusia Bulldogs. The loss drops Neal to 3-4 on the season and 2-2 in the region.

The Eagles came out strong to start the game, holding the Bulldogs to only five yards on six snaps, then driving down the field to the UMS 12 yard line and scoring first on a completed field goal by senior Tommaso Bartolucci, going up 3-0 with 1:43 left in the first quarter.

UMS Wright answered with a four-play drive that ended with a 19-yard touchdown run by Symon Smith as the buzzer sounded to end the quarter, moving the Bulldogs into the lead 7-3. The fast-paced scoring volley continued a mere two minutes and twenty seconds later with a 52-yard touchdown run by Neal senior Marvin Maddox, and a good PAT by Bartolucci, putting the Eagles ahead 10-7.

That lead lasted all of 15 seconds when UMS Wright’s Kameron McWilliams returned the kickoff 78 yards for a touchdown. The kick was good, putting the Bulldogs up 14-10.

A high snap on the punt for Neal, gave the Bulldogs excellent field position on Neal’s 28 yard line to end the Eagles next possession. UMS was able to score two plays later on a 28-yard run by Smith, increasing their lead to 21-10 with 6:35 left in the half.

On Neal’s next series, Matthew Thomas’ pass was intercepted near the Eagles’ 20-yard line and run back to the 50-yard line. The Bulldogs needed just over four minutes to do it, but they were able to capitalize on the turnover, with Smith making an 11-yard touchdown run with 55 seconds left to play in the second quarter. There was just not enough time for the Eagles to score before the buzzer sounded to begin half time, so both teams headed to the locker room with UMS ahead 28-10.

Neal received the ball to start the second half, but turned it over on downs, after an incomplete pass attempt on a fourth and four from the Bulldogs 39-yard line. The Eagle defense forced some negative plays and a fumble, but UMS recovered and then chose to punt on a fourth and 16 from their own 34 yard line.

After another punt by the Eagles, the Bulldogs’ next drive was stopped with an interception by Neal senior Christian Wood. Three plays later, UMS recovered a fumble, taking over on Neal’s 21-yard line. They were able to score on a 10-yard run by Smith with 11:15 left in the fourth quarter, increasing their lead to 35-10.

Eighteen seconds later, Maddox was deep for the Eagles on the kickoff, and blew past the Bulldog defense with the help of his teammates who opened a hole for him to complete an 89-yard touchdown run on the kickoff return. Bartolucci added the extra point, putting the score at 17-35.

The teams traded punts before UMS scored one last time on a hard-fought 5-yard run by Dylan Casstevens with 2:30 left in the game. Though the Eagles were moving the ball consistently down field, time ran out without another score, and Neal fell 17-42.

About the loss, Coach Williams said, “Overall, we didn’t have a great week of practice this week. We’ve got to continue to learn from it. All it’s about is doing it the right way all over the place: in the school system, in the classroom, in the weight room. You’ve got to do it the right way.”

He continued, “I think we can get some things done here at W.S. Neal with these kids we’ve got, but we’ve got to set the precedent to do it the right way, and it starts from the top all the way down to the bottom.”

“It’s not about us,” Williams pointed out. “It’s about our kids. We’ve got some kids that will fight. I lost one tonight [Austin McCall] that I know he’s a fighter. He’s a stand-up fighter.

“I have a bunch of guys like that. Our kids fought. I knew they would fight. I know they’re the kind of kids that will fight. I told them that all week, but that’s not what I was talking about.”

“We’ve got to do the things that it takes and put in the ingredients on a consistent basis to get it done, and it starts from right now to next time around. We’ve got to get in there and go to work,” Williams concluded.