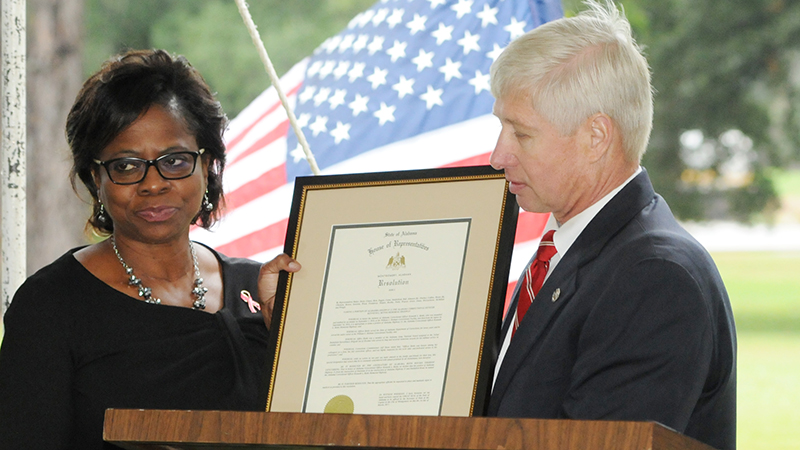 Through collaboration between correctional officers at William C. Holman Correctional Facility and the state legislature, the memory and life of Correctional Officer Kenneth L. Bettis will live on forever.

Bettis died on Sept. 16, 2016, after being assaulted by an inmate 15 days prior at Holman, which is located north on Highway 21. The original resolution and subsequent memorial signage was prompted by fellow coworkers of Bettis at Holman Prison with Hayden Sizemore and William Despain leading that effort on behalf of the Holman staff in honoring the life and work of their friend and colleague.

“Much work went into this dedication,” Baker said.

To pay for the sign, Bettis’ colleagues raised funds for the dedication.

“This memorial highway sign will serve as a visual remembrance of the loving life of Officer Bettis,” Baker said.

Albritton said it seems like the willing, able and ready are the first to go.

“Officer Bettis was there; he stood his ground,” Albritton said. “He absorbed the blow.”

Correctional Officer Willie Harris, a 20-year veteran in corrections, said Bettis made quite an impression on his son. So much so that his son wouldn’t stop talking about him, he said.

“This has to be a great guy,” Harris said about Bettis.

“The safety precautions tightened up,” he said. “We now were safety vests.”

Prior to serving as a correctional officer, Bettis served in the Alabama Army National Guard.

Bettis served as a corrections officer at Holman since 2009. He was a military veteran and had served on active duty in Iraq with the Alabama Army National Guard. Bettis’ military awards and decorations include the Army Commendation Medal, Army Achievement Medal and Southwest Asia Service Medal with Bronze Service Star.

Danny McQuieter, Bettis’ father, said it the dedication ceremony was a good day for his son’s memory.

“It’s a good day in his memory,” McQuieter said. “The sign will never be forgot. It brings back the fact that I don’t have him. I haven’t had him for a year. I’ve just got to live with it.”

McQuieter said his son was an all-around great person, and rarely got upset with anything.

“He had an even living attitude,” he said. “He never drank, never smoke.”