Back against the wall 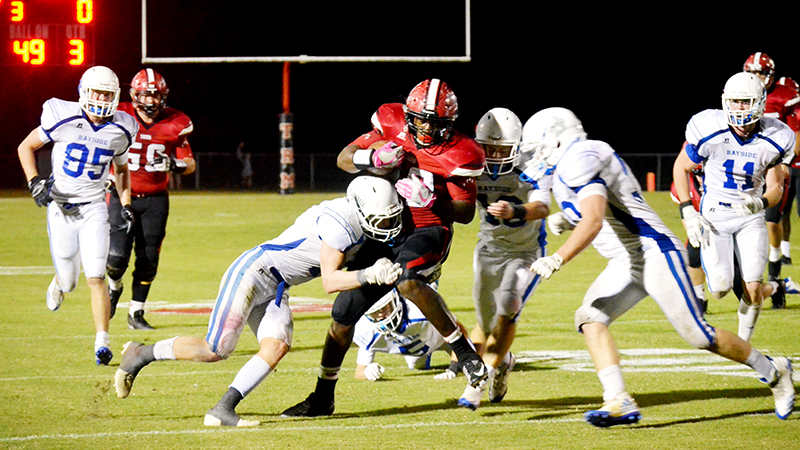 Michael Campbell scored both touchdowns for the Tigers, including an 80-yard kickoff return, to give TRM a chance. Travis Tessandori | The Brewton Standard

Four quarters weren’t enough to decide the Friday night matchup between T.R. Miller and Bayside Academy. A turnover in the fourth quarter and on the first possession of overtime would eventually cost the Tigers the game, as the Admirals kicked a field goal in overtime to win, 17-14.

Head coach Andrew Thomas said that the team beat itself more than anything else.

“Credit goes to Bayside,” Thomas said. “We really beat ourselves, though. Turnovers and crucial penalties really gave them the game. We just couldn’t get out of our own way.”

The first three quarters were rather uneventful, as neither team was able to get on the scoreboard. Each team punted three times, and only had one opportunity in the opposing team’s territory.

The Tigers’ chance came on its second drive, where a 39-yard pass on 3rd and nine from Joshua Jolly to Matt Smith put TRM in Admiral’s territory. After taking the ball to the 26-yard line, an incomplete pass on 4th down would give possession back to Bayside.

Bayside would take the ensuing drive into TRM territory, but a Ricky Samuel sack would force a 39-yard field goal attempt. The field goal was missed to leave the game scoreless.

After the team’s swapped pairs of punts, Jolly took a punt return to midfield after breaking tackles and reversing direction to give the Tigers good starting field position. A three and out would close out the half and send the game to halftime, still 0-0.

The third quarter was much of the same. The Tigers’ defense forced a three and out to open the half, and took its first possession of the third quarter to the Bayside 25-yard line, but could not convert a pass on a 4th and four that ended the threat.

It wasn’t until the fourth quarter that the scoreboard was changed. The Admirals were in a tough spot at midfield and sat at 4th and two, but a pass interference call extended the drive. This allowed Bayside’s quarterback Matthew Kalifeh to connect with Tucker Milteer on a 46-yard pass that found the end zone. The PAT made the score 7-0 with 11:30 remaining in the fourth quarter.

The Tigers answered back just one minute later behind Demarquis McMillan and Michael Campbell. McMillan took the first carry of the drive into the red zone,