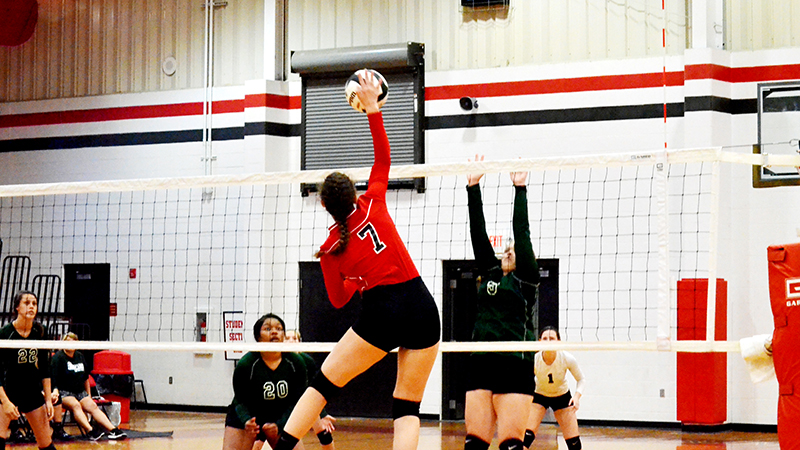 Mary Madison Brown spikes the ball in the matchup versus Flomaton. Travis Tessandori | The Brewton Standard

The T.R. Miller volleyball team (24-6) advanced to the “Elite 8” for the third straight season after winning its area tournament and a super regional tournament this past week.

The Tigers were the No.1 seed in the area, so it hosted Hillcrest, Flomaton and Excel last Tuesday in the area tournament.

The tournament was largely dominated by the Tigers.

Steely Ruzic collected five aces and 11 kills. Mary Madison Madison Brown had six kills and Mallori Floyd had five of her own.

Flomaton defeated Excel to advance to the championship game against the Tigers.

Ruzic led the way with 11 kills and 10 digs. Reiss played another great game, collecting 16 assists and four aces. Abigail Cave had five kills in the effort.

“The Streak” was alive and well, as head coach Terri Lynn Thompson pointed out.

“The Streak has done a great job making some noise and getting the crowd into the matches this season,” Thompson said. “They’ve created a fun atmosphere for our girls to compete in. T.R. Miller is a special place and I think we are all grateful to be a part of it.”

The tournament win sent TRM to the super regional tournament Friday, where they would go 2-0 to advance to the Elite 8.

Anna Grace White did an exceptional job on the defensive end with nine digs in the match. Addi Smith did her part with a great all-around game, collecting seven aces, kills and digs. Ruzic was strong on the offensive side with 19 kills. Reiss helped in that with 20 assists.

“I am extremely proud of this group of young women,” Thompson said. “We came in on Friday and played two consistent matches. We are excited about the opportunity to go to Birmingham and compete for a championship.”

The team played two seeding games on Saturday, which they lost to Montgomery Academy and Bayside. With the losses, the team will travel to Birmingham Wednesday to take on Carbon Hill at 8 a.m. for round one.

Back against the wall