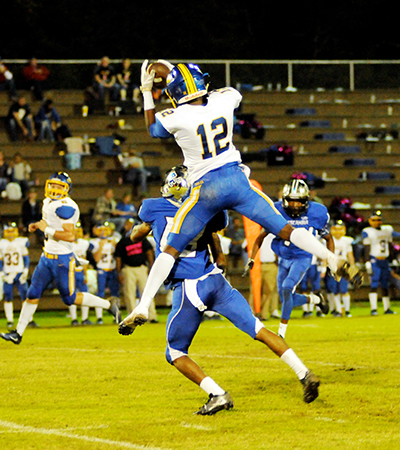 Jacobey Hawthorne leaps over a defender to make a spectacular catch. He had two touchdowns in the game, one recieving and one rushing to lead the Eagles to its victory over Escambia County. Andrew Garner | Atmore Advance

The Eagles victory places the East Brewton team as the No. 4 seed out of Class 4A, Region 1 going into the first round of the state playoffs. WSN also needed Thomasville to win over Satsuma, a team it has a win over. THS barely beat SHS 30-28 tonight.

“First of all, Rico is doing a great job down here with these kids,” Williams said. “I’m new walking in here. It’s about trying to survive and getting your guys adjusted to the program. I’m proud of my guys.

“I hate that we’re not in position to mix it up with some of the big top-notch teams in the region,” he said. “The main thing is the process to get there.”

Although the Eagles didn’t play as crisp as he’d like, Williams said the boys did what they had to do to get the win.

“They played better than us tonight,” he said.

“That’s our big play guy,” Williams said. “He had a great game overall.”

Hawthorne’s first score came late in the first quarter on a 37-yard scatter down the field. His second came late in the second quarter on a 28-yard pass from quarterback Matthew Taylor with 30 seconds left before the break. With the score, the Eagles led 20-0 at halftime after a blocked extra point attempt.

In between Hawthorne’s two first-half scores, Isaac Bonam punched the ball in from 2 yards with 3:50 left in the second quarter.

After the break, the Eagles fumbled on their first possession of the second half, but the Blue Devils couldn’t do anything with the possession.

ECHS could’ve quit, but didn’t fold late in the game as Jordaun Patterson rushed the ball in from 35 yards with 28 seconds left. Ja’Maya Frye converted the 2-point conversion to make it 27-8.

The Eagles defense allowed -2 yards of total offense on the night, a stat that Williams was happy with.

“The whole team played hard,” Williams said. “We dealt with the elements well. I am proud of the defense. To allow -2 yards of offense means they executed our gameplan.”

Jacobey Hawthorne collected 152 yards of total offense, including a spectacular one handed catch for a touchdown. He also scored on the ground.

Isaac Bonam had a rushing touchdown of his own.

The win locks up playoffs for the Eagles, but there is one more test in front of them. That test comes Friday night, as the team faces off with the T.R. Miller Tigers in the Battle of Murder Creek.

“We are going to prepare for it like every other week,” Williams said. “They have a talented team in all three phases of the game. Their offensive line is impressive and they are coached well. We are going to have our hands full.

Area tourney next for Tigers