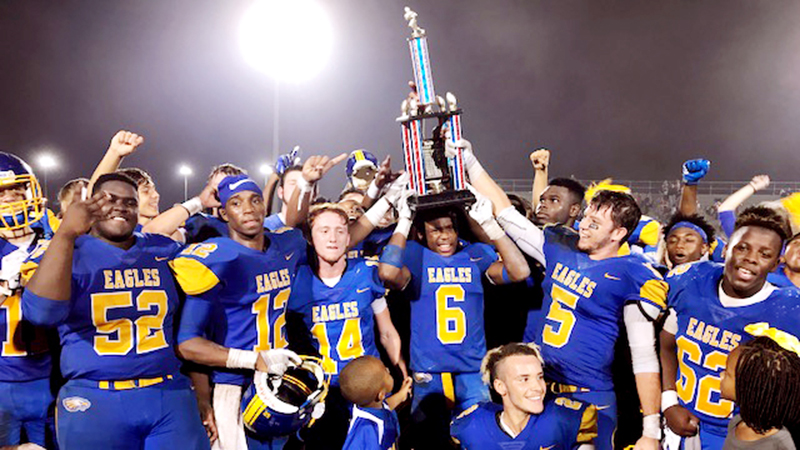 WSN was able to knock off the Tigers on Friday night to bring the Battle of Murder Creek trophy back to East Brewton.This is the fourth year in a row that the trophy will be switching sides of the creek. Travis Tessandori | The Brewton Standard

For W.S. Neal and T.R. Miller, the rich got richer and the poor got poorer Friday night in the Battle of Murder Creek. One week after WSN clinched a playoff spot and TRM was eliminated from playoff contention, the Eagles got a huge game from its superstar senior, Jacobey Hawthorne, to knock off the Tigers 27-17.

WSN head coach Andro Williams said that Hawthorne’s experience in this game played a big role in his ability to be a game changer.

“He is who he is,” Williams said. “He’s been in these games. His experience from that, there’s nothing like it. You want to have kids like him on the field.”

The Eagles jumped out to an early lead behind two TRM miscues, including a high snap on a punt attempt on the first drive of the game. After a big first play, WSN snuffed out the TRM drive, forcing a punt. Hayden Atkinson lined up for the punt, and shortly after would be chasing the ball after the long snapper snapped it over his head. He would recover at the Tigers’ 19-yard line, giving the Eagles good field position to open up its first drive.

TRM head coach Andrew Thomas said that the field position they gave the Eagles played a big role in the loss.
“We had three or four miscues that set them up with great field position,” Thomas said. “That is hard to overcome.”

Hawthorne would start his dominant night on the first play, taking the football around right end for 19 yards on a jet sweep to give the Eagles a quick 7-0 lead after a Tommaso Bartolucci extra point.

Hawthorne wasn’t done. On the Tigers’     ensuing drive, Hawthorne dove in front of a Stokes Jennings’ pass on 3rd and eight to give the Eagles the ball back on the TRM 31-yard line. After chipping away, quarterback Matthew Thomas would take a quarterback keeper around right end to find a paydirt. The PAT was blocked to keep the score at 13-0 with three minutes remaining in the first quarter.

The teams would swap punts as the game moved into the second quarter, where the Tigers would weather the storm.

Senior Joshua Jolly took a play-action fake for a big gainer on the first play of the second quarter, setting up an eight yard touchdown run for senior Demarquis McMillan, cutting the Eagles’ lead down to 13-7 early in the second quarter.

The offenses would stall out until the last drive of the half, where TRM sophomore Chino Fernandez intercepted a Matthew Thomas pass and returned it to the WSN 38-yard line with 1:51 remaining to give the Tigers a boost going into halftime. After TRM marched into the red zone, Matthew Hutchins came up with a big sack at the 14-yard line with 15 seconds remaining to force a field goal for the Tigers. Matthew Morgan split the uprights with a 31-yard field goal that sent the game to halftime, 13-10 in favor of the Eagles.

After WSN went three-and-out to start the second half, Hawthorne made his presence felt again on the defensive side. McMillan was stood up by the WSN defense and fighting for yards, when Hawthorne reached in and stripped the ball clean out of the running back’s hands. Hawthorne would fall on it to give the Eagles the ball at the TRM 44-yard line. Nothing came out of the drive as Neal would turn the ball over on downs just four plays after.

A frustrated McMillan would quickly redeem himself, breaking a 67-yard run to set his team up at the WSN 3-yard line. McMillan would clean up the slop, punching in a 3-yard run for his second touchdown of the game with 3:40 left in the third quarter, and giving the Tigers its first lead of the game, 17-13.

WSN was forced to punt, which brought out Marvin Maddox. Maddox would help in stopping the bleeding, pinning the Tigers at its own 5-yard line. The tough field position helped the Eagles force the Tigers to a three-and-out to end the third quarter.

After struggling all year on kickoff returns, the Tigers would have another miscue, this one costing them the game. A pooch kick by the Eagles appeared to be heading out of bounds at the 34-yard line, but instead bounced straight up. Hawthorne swooped in to recover the kick as the WSN fans started rocking.

The play of the game came two plays later on 3rd and 11, where the Eagles ran a play action dump off to Maddox, who broke tackles and spun away from defenders to pick up the first down and move the ball to the TRM 11-yard line.

Later in the drive, the Eagles faced a 4th and 2, where Williams decided to go for it and try to ice the game. Maddox rewarded that decision with an 8-yard run that he would punch in the end zone, to extend the lead to 27-17, with seven minutes remaining in the game.

Williams said his decision to go for it instead of electing to kick a field goal came from his feeling that they could put the game away.

“I felt that we needed a big play,” Williams said. “A touchdown there was something that would kind of put the nail in the coffin, and the kids came through.”

The Tigers struggled to move the ball after that, and WSN would spend its offensive drives winding the clock down with run plays.

As the game clock struck zeroes, WSN fans and players stormed the field to celebrate what would mark their Battle of Murder Creek victory. The win marks its third in the past six years after only winning two of the previous 14 matchups.

Thomas was proud of the way his team competed, considering the circumstances.

“I was proud of the way we fought,” Thomas said. “Coming into the game knowing we weren’t going to the playoffs, they were still right there fighting. We are young, and there are a lot of things to evaluate from this year that we can improve on next year to get us back where we need to be.”

Williams was happy with how the team started and finished.
“We got out to a fast start,” Williams said. “We had some things that didn’t go our way there in the middle of the game. We showed our character after they took the lead back in the third. We had some opportunities throughout the course of the game to break it open, but most importantly we got it done.”

Maddox finished the game with 65 yards and two touchdowns on 17 carries.

McMillan was the offensive leader for the Tigers, accumulating 145 yards and two touchdowns on 18 carries.

Both teams finished the season at 5-5, and WSN looks ahead to Munford this Friday in the first round of the playoffs.

Williams doesn’t treat one game bigger than any other, and this week is much of the same.

“We just want to win,” Williams said. “We were able to do that to take some momentum into the playoffs, but winning is all that matters.”

TRM will miss the playoffs for the first time since 1983, a stretch that has landed them with the third longest streak of its kind in Alabama high school football history.

Until next year, the BOMC is put to rest for 364 days, with bragging rights resting on the East side of the creek.