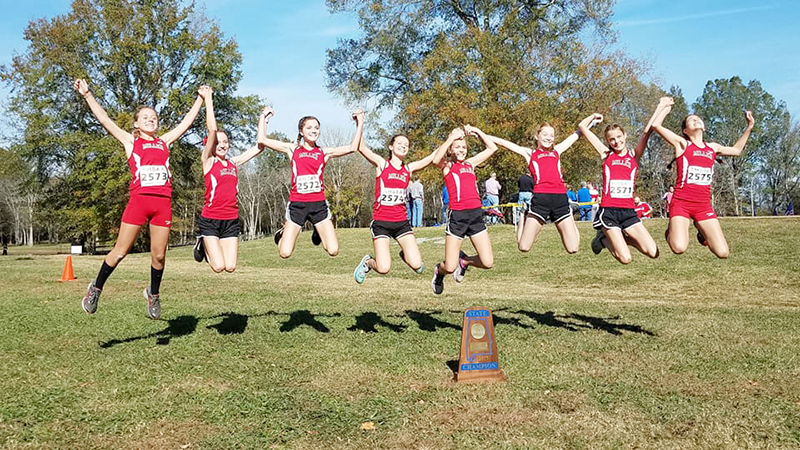 The TRM cross-country girls finished first at the state meet this past weekend. Courtesy photo

The T.R. Millers cross country team closed out an incredible season with a state title this past weekend.

The lady Tigers locked up the state championship with a dominant performance, seeing all of its runners finish in the top half of competitors.

The boys’ team finished in fourth out of the 12 competing teams.

After winning the sectional meet, the girls’ team was again paced by one of 3A’s best female runners, freshman Olivia Blackmon, who set a personal record with a time of 18:56.99. That time was good for first overall out of 128 competitors, earning Blackmon the individual state title. Blackmon finished first in the sectional meet, as well.

This is the seventh time in the last nine years that a Tiger has taken home that honor.

Head coach Rob Atkinson said that the girls were spectacular all year.

“This team really came together better than any team I have ever coached,” Atkinson said. “The state championship was a great experience for them, but really they were spectacular all year. They all reached their goals, and even exceeded most of them.”

Atkinson also gave credit to Coach Ash, who coached prior to Atkinson, Billy Bryant and Kim Flores for their roles in developing the girls over time.

Atkinson said that the boys were remarkable and were one of the best male cross country teams TRM has ever had.

“It’s the best finish the boys have ever had at TRM,” Atkinson said. “I am pleased with their top four finish, that is incredible in the grand scheme of things. We had nine runners finish under 20 minutes, that is the first time that has ever happened here. I am so proud of the boys.”

With the season over, Atkinson said it is up to the work the kids put in during the offseason to continue to get better heading into next year.

“It is all about the work they put in over the summer,” Atkinson said. “If they work hard then we definitely have an opportunity to get back and do it again. We have a good core of young runners, and they’ll continue to develop.”