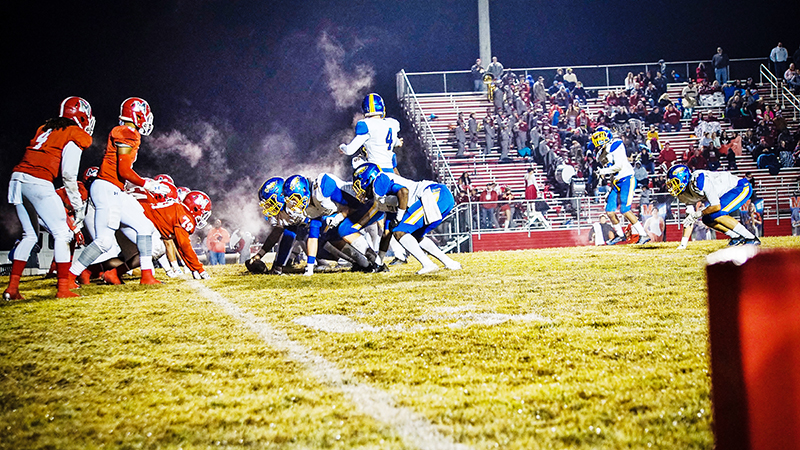 Red zone offense was a key as WSN was able to win a tough game on the road again No.6 Munford. Matthew Thomas directs traffic here before Noah Hill punched in his one-yard touchdown run. Travis Tessandori | The Brewton Standard

In a tough road game on a cold night, W.S. Neal was able to knock off a heavily favored No. 6 Munford team that was riding a nine game winning streak coming into action, 21-12.

The only thing that is more impressive than the victory itself is the fashion that the Eagles did it in. After falling behind 12-0 early in the first quarter because of miscues, WSN dominated the game in every facet. Offensively, the Eagles pounded and pounded on the ground until the Lions were physically exhausted. Defensively, the only points allowed were on a short field because of turnovers. Besides that, there was nothing to speak of from a Lion offense that averaged 35 points per game over the course of the season.

The first Eagles mistake came after a three-and-out from the Eagles defense on the first drive of the game. The Munford punt was muffed by Jacobey Hawthorne and recovered by the Lions at the WSN 25 yard line. The Eagles defense stayed strong and forced a 4th and 15, but the Lions quarterback, Tanner Reeves, connected with Marshall Clark for a 30-yard touchdown from there. The PAT was missed to keep the score at 6-0.

The teams swapped punts before the second Eagles’ mistake would lead to more points. Late in the first, the Eagles fumbled a handoff at its own 11-yard line. Reeves would connect with his electric running back, Zay Britt, on the first play of the Lions’ drive to extend the lead. Another missed extra point left the game at 12-0.

“We knew that we hadn’t started fighting yet,” Williams said. “We have been down before, so there was nothing to panic about. Our kids showed their fight.”

Senior Marvin Maddox took the ensuing kickoff to the 43-yard line to get the sideline and the crowd back energized, and the comeback was on from there.

After a big connection between quarterback Matthew Thomas and Matthew Hutchins on the first play, the Eagles put the ball in the hands of junior Noah Hill, who bruised his way in for a 1-yard touchdown run.  Tommaso Bartolucci split the uprights to cut the lead to 12-7.

WSN forced a punt, and would take the ball to the Munford 25-yard line on a great throw from Thomas to Hawthorne, but the drive would be snuffed out there heading into halftime.

The drive that the Eagles opened the second half with was huge. Starting at its own 36-yard line, WSN faced a 4th and two after three plays. Williams decided to go for it, and it paid off as Thomas snuck ahead for three yards to extend the drive. Maddox later took a handoff, breaking tackles and reversing field, 33 yards to set up a 1st and goal from the 8-yard line. He was rewarded with a five yard touchdown where he dove across the goal line with defenders all around him. Bartolucci nailed the extra point to give WSN its first lead, 14-12.

A three and out would again give the Eagles the ball for a long, tough, physical drive that lasted over six minutes of game time. WSN converted two 3rd-and-short plays to extend the drive, taking them down to the Munford 7-yard line as time ran out in the third quarter.

The Eagles faced a 4th and goal from the 2-yard line later in the drive, where a high snap forced a busted play and the drive was snuffed out by the Lions.

The Lion crowd was back engaged as Munford began marching down the field. They took the ball into WSN territory, threatening to take the lead back from the Eagles. Thomas made a huge play as Reeves dropped back to pass and threw the ball to a then-open receiver. Thomas laid out and made a spectacular interception at the WSN 24-yard line to stomp out the threat with 9:15 remaining in the game.

The Eagles would use the ground-and-pound to take more time off of the clock, eventually giving the ball back to Munford on downs in Munford territory.

The play of the game was made on this drive, as Munford again looked to go the length of the field with minutes remaining to take the lead back.

After a couple of first downs, Reeves threw the ball looking for Britt, but the pass was deflected by senior defensive back Bahjon Taylor. The ball fell in the hands of Christian Wood who ran down the Munford sideline 50 yards for a pick six and a dagger. Bartolucci split the uprights to make it a two score game, 21-12 with 56 seconds remaining in the game.

Williams felt that the secondary play was the difference in the game.

“Munford had some good receivers,” Williams said. “They had success throwing throughout the year, and we knew that was going to be a big factor. We had a good game plan and the boys came through with some big plays.”

Things got chippy, as Munford had two unsportsmanlike conduct penalties and a roughing the kicker called on the extra point attempt. The ensuing Eagles’ kickoff was from the Munford 20-yard line.

The Eagles were able to force a turnover on downs and Thomas kneeled once to complete the comeback, upset win.

“Show your class right here,” WSN coaches said as the teams met in the middle of the field to shake hands after an emotional, physical game.

Williams was happy with the way his team handled themselves during the latter part of the game when things started getting chippy.

“They handled themselves well,” Williams said. “That stuff was going on a lot during a lot of the game and our kids held it together. That’s when you show some character. You just have to know how to win, and you have to know how to lose. They did a great job.”

The Eagles outgained the Lions in total yards 305-243.

WSN controlled the game with its running attack, collecting 219 yards on 55 rushes. The attack was led by Hill, who accumulated 87 yards on 25 attempts. Maddox carried his weight to the tune of 60 yards on 14 attempts.

The Eagles defense held the Lions to just 91 rushing yards, with 70 of those coming on one play.

A big difference in the game came on penalties, where the greatly matured WSN team only tallied two for 10 yards, and Munford had nine for 120 yards.

WSN will travel to Montgomery this Friday to take on Alabama Christian in round two of the 4A playoffs.