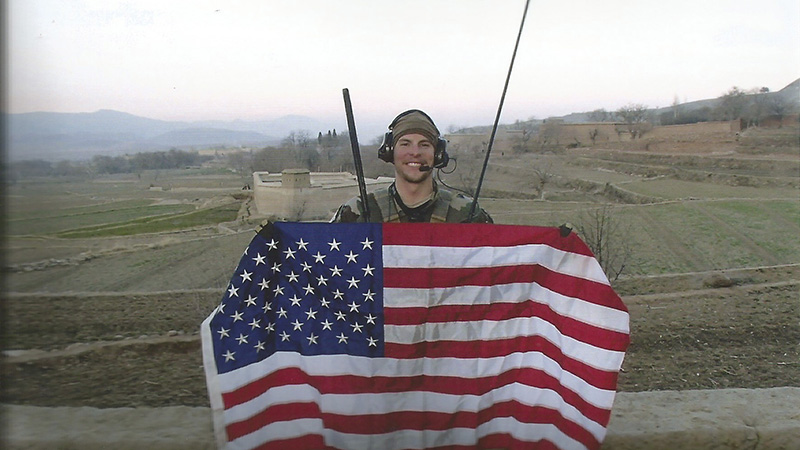 The late Staff Sgt. Forrest Sibley while in Afghanistan. His property in Bradley was burglarized in October.

Just before Staff Sgt. Forrest Sibley left the United States in 2015 for his fourth tour of duty in the Middle East, he visited the remote acreage he had purchased in the Bradley area.

Forrest Sibley had plans for the property.

“It was his favorite place in the world,” his grandfather, Raiford Sibley, whose property is adjacent to Blue Lake. Forrest’s father, Brent Sibley, agreed. The men said their son and grandson spent every leave in the woods; and visited before every deployment.

Before that 2015 tour, which no one knew would be his last, Forrest asked his grandfather and father to get a few things done for him on the property.

In August of that year, then 31-year-old Forrest was assigned to the 21st Special Tactics Squadron based at Fort Bragg’s Pope Field and was deployed to Afghanistan. He and Capt. Matthew D. Roland, 27, died when two men wearing Afghan military uniforms opened fire within an Afghan National Defense and Security Forces compound in Helmand province and killed the two airmen. The two shooters were killed when service members returned fire.

It was only then that the elder Sibleys learned the young man they loved so much had been awarded four Bronze Stars, received two Purple Hearts, and the Air Force Commendation medal. Since then, Forrest Sibley has received many other honors and tributes, most recently when a training facility at Keesler Air Force Base in Biloxi was named for him.

As they worked through their grief, the elder Sibleys decided to continue with Forrest’s plans for his property. Forrest had planned to bring his military friends to the quiet of the woods adjacent to the Conecuh National Forest, and his father and grandfather liked the idea, so they continued the work.

This was to be the year. The getaway, which is so far off the beaten path they can’t get electrical power, was furnished and equipped with generators to keep the guests comfortable.

But in late October, the Sibleys’ plans to entertain Forrest’s friends changed.

Brent Sibley, who lives in Oneonta, came south, and was headed out to the property to do some work.

“When we got there, we saw the gate had been cut open,” Raiford Sibley said. “They took everything, down to the knives and forks in a drawer in the kitchen.”

“Everything” included furniture and three generators.

The burglary is one of what residents of the area say has been a rash of burglaries that have occurred in recent weeks in the area. Bradley sits just across the Covington/Escambia County line, and the burglary is being investigated by the Escambia County Sheriff’s Department.

“It would have taken two or three trucks to get everything out of there,” Raiford Sibley said. “At about the time it happened, there was a forest fire in the area that had been set. The investigator believes the fire was set as a diversionary tactic.”

The Sibleys aren’t sure what to do now. They’d like to carry on with the family dream of hosting Forrest’s friends and comrades in Alabama, but they worry they can’t protect the property.

“It’s a shame,” Raiford Sibley said. “Forrest gave his life fighting for his country, and people here have respect for other people’s things.”

Anyone with information about the burglaries is asked to call the Escambia County Sheriff’s Department at 251-867-0304.