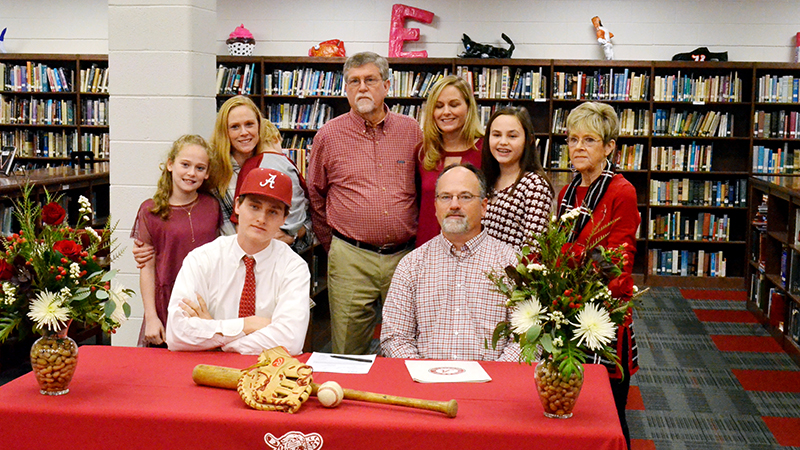 Williamson is pictured with family, representing the Crimson Tide. Friends and family gathered together to watch Williamson sign his letter of intent. Travis Tessandori | The Brewton Standard

Family, friends and former coaches gathered together to celebrate Williamson’s accomplishments and to see him sign the paper that officially made him a part of the Crimson Tide and the school’s historic sports history.

“It’s amazing to see all of life’s work coming together,” Williamson said. “This is probably the greateast accomplishment of my life, so far. It is nice to represent my family and the Tigers at that stage.”

Williamson, a 6’4, 200 pound senior, had an unbelievable season last year at the plate. The lefty hit .616, with 63 runs, 41 RBI’s, nine doubles, two triples and eight home runs in 34 games for the Tigers. Williamson was 9th in the country in on-base percentage, with an incredible .764 mark.

Deservingly so, Williamson was named the Alabama Sports Writers Association Class 3A Hitter of the Year.

TRM head baseball coach Kevin Madden said there are a lot of parts to Williamson’s game that make him the standout athlete that he is.

“I’m extremely proud of Drew and all of his accomplishments,” Madden said. “He has a bright future ahead of him because of his character and work ethic. Not only will the University of Alabama be getting a great baseball player, but a quality person and student. His leadership on and off the field has been an asset to this program.”

After a tough year last year going 19-34, the University of Alabama is looking to right the ship.

Williamson and the Crimson Tide are coached by Brad Bohannon, who was the 2015 American Baseball Coaches Association and Baseball America National Assistant Coach of the Year. He has coached as an assistant coach in the SEC for 14 years.

As for Williamson, he will compete in his senior season this spring, hoping to improve on already jaw-dropping numbers. Although, for the sweet-swinging lefty that is easily atttainable.

As for many young athletes in the south, the SEC is the dream, as was the case for Williamson.

“It has always been my dream to compete in the SEC,” Williamson said.

Next spring, Williamson will see those dreams come to life.