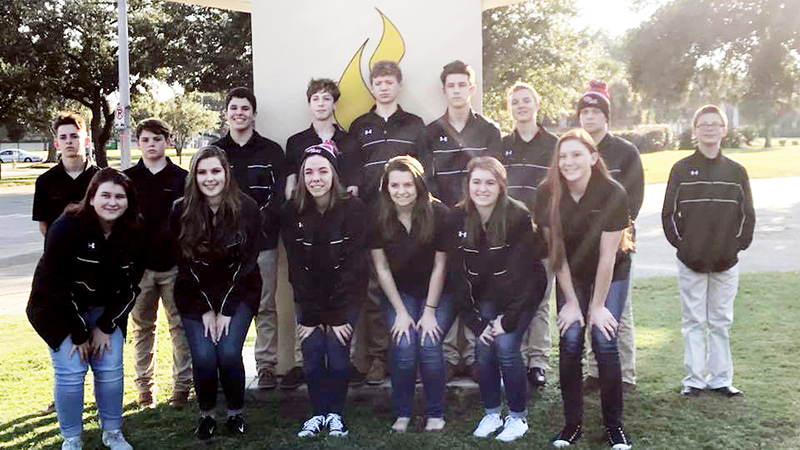 The boys and girls teams together before their action at the sectional meet. Travis Tessandori | The Brewton Standard

The TRM Tiger Swim Team traveled to Mobile last week to compete in the 1-5A South Sectional High School Meet.

The meet included 12 total teams from southern Alabama encompassing schools from 1A-5A. TRM, 3A, was one of the smallest schools represented in the division. Unlike most sports, swimming is grouped into two competitions, 1-5A and 6-7A, so TRM was competing with schools that field much larger teams.

Even with that, the boys and girls teams were both able to exceed in their respective events.

The boys were able to secure a second place finish, which landed them an invitation to the state swim meet in a couple of weeks.

The boys were led by team captain Nolan Atkinson, and put on a great performance.

Two of the boy’s relay teams qualified for state, including the 200 medley relay team and the 4 x 100 freestyle relay team.

Cole Jernigan, anchor of both of those teams, also placed and qualified for state in the 50 and 200 freestyle races.

Cobi Godwin placed in the 100 breaststroke and 100 fly. He was a part of both relay teams.

Mac Baxter placed and made the state race in 200 and 500 freestyle, as well as taking place in the medley relay.

The team will travel to Auburn University on Dec. 1-2 to compete in the High School State Swimming and Diving Meet, where they will face off with all qualifying teams across the state in the 1-5A classification.

The girls finished fourth overall out of the 12 competing teams.

Head coach Angel Boyd was very proud of the job the girls did.

“The girls team had an amazing season,” Boyd said. “Finishing fourth overall is quite an accomplishment. They swam their hearts out in one of the most competitive divisions in the state.”

Sailor Smith placed in the 200 and 4 x 50 freestyle and medley relays.