The Coastal Alabama Warhawks’ Meagin Farmer and Bailey Mann’s outstanding seasons on the court this year were rewarded, as the pair was announced as a part of the ACCC first and second teams, respectively.

Head coach Steve Dickey said that the girls were deserving of the awards with the work they put in throughout the year.

“They both meant so much to the success we had this season and I look forward to having them both back next season.

Farmer, a freshman hitter, made first team along with seven others from the conference with a well-rounded year. Farmer held a hitting percentage of .341, which ranked fifth overall in the conference. Her average of 3.23 kills per set ranked fourth. Overall, Farmer tallied 268 kills, 47 blocks and 90 digs on the season. She played in 28 games this year. 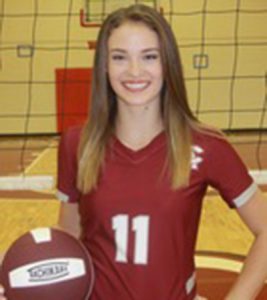 “Meagin (Farmer), relatively speaking, is undersized as a middle blocker, but she is also athletic and jumps so well that she makes up for the lack of height with her quickness and ability to get on the floor quickly,” Dickey said.

Mann, a freshman setter, was awarded a second team nod as she carried a heavy load for the Warhawks in the middle of the floor. She ranked third in the conference with 8.24 assists per set. She tallied 717 assists on the season, including 71 kills, 24 aces and 102 digs. She was also named the ACCC player of the week during the season for the week of Oct. 9-15. 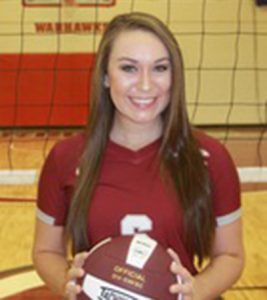 Bailey (Mann) is a perfectionist who works hard to get her hands on every ball,” Dickey said. “The ball comes off of her hands so clean,that she probably didn’t have 15 doubles called on her all year, which is pretty incredible.”

The Warhawks finished 13-16 overall, while placing seventh in conference with a 7-10 mark.

The team was unable to make the playoffs, but Dickey felt that it was one of his team’s best year yet.

“Even though we had one of our best years ever, we still fell short of our goal of making the state tournament,” Dickey said. “We fought hard all season, and we had some great early season wins.”

The Warhawks are looking good for the 2018 season, as Farmer and Mann will return, including 3 other starters.