WSN closes out year with big loss in round 2 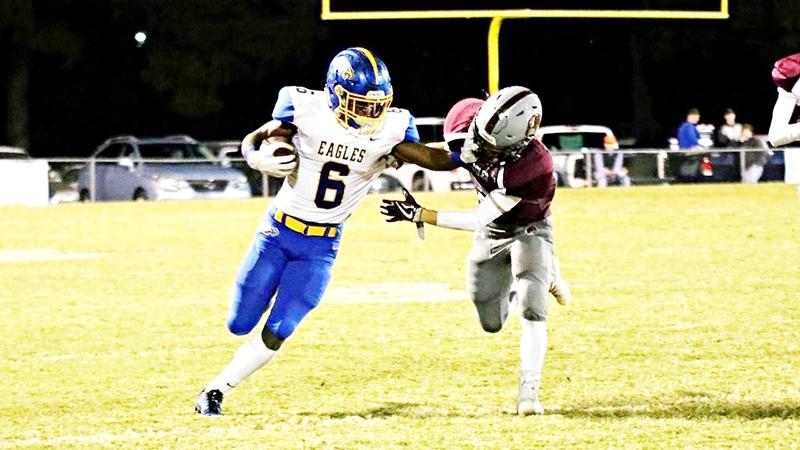 Marvin Maddox stiff arms a would be tackler during round two of the 4A playoffs. Allison Terrell | The Brewton Standard

Round two of the playoffs did not go as planned for the W.S. Neal Blue Eagles, as a combination of struggling to get off of the field defensively and red zone struggles offensively led to a 38-7 blowout win for a raucous Alabama Christian.

The loss eliminates WSN from the playoffs, and ends its season at 6-6 overall.

It was a big first quarter for ACA, who jumped out to a 21-0 lead behind senior running back, Alden Stroud.

Head coach Andro Williams credited ACA with their game plan and execution for the plays the running game was able to create in that first quarter.

“Stroud is talented and we were weary of him going into the game,” Williams said. “They made the plays there and we didn’t. Hats off to ACA and their coaches.”

Stroud gave his first blow on the first drive, taking a handoff up the gut for a 48-yard touchdown to put ACA on top, 7-0. Prior to the touchdown run, WSN had forced a third and 18, but allowed a 22-yard pass to extend the drive.

WSN went three and out on its opening drive, and would allow the second touchdown on a third and 11 from its 18-yard line, when Reece Solar connected with Cole Schlemmer to make it 14-0.

After another three and out, Stroud would strike again, breaking free for a 54-yard run that gave ACA a 21-0 lead just eight minutes into the game.

WSN would take the ball into ACA territory behind big plays from quarterback Matthew Thomas and Jacobey Hawthorne, but would eventually turn the ball over on downs.

Stroud broke another long run to end the first quarter to put ACA in the red zone, where they would eventually score on a two-yard quarterback keeper from Solar to open the second quarter and to make it 28-0.

Thomas connected with Taylor Fountain for a big gain on the Eagles’ ensuing drive, but WSN was forced to punt shortly after.

The drive of the game came here for ACA, as it lasted six minutes and saw two fourth down conversions and a third down conversion. It ended in a field goal to give the halftime score of 31-0.

Williams said that his message at halftime was the same as it had been at every point of the season, to keep fighting.

“It was kind of uncharted territory,” Williams said. “I appreciate the kids for continuing to fight. We wanted to come back and win the second half, and they didn’t quit.”

WSN’s first two drives of the second half would result in turnovers in the red zone.

The first drive saw big plays from Thomas and Noah Hill, before the Eagles faced a fourth and goal from the 13 and were stopped at the ACA 5-yard line.

ACA would score on its ensuing drive after a couple of third down conversions, rewarding tight end Garrett Cottingham with a two yard touchdown run after he took a pass more than 40 yards to the WSN 2-yard line.

WSN again marched down the field and faced a fourth and eight from the ACA 12-yard line, but a sack would snuff out the drive and keep the score 38-0 early in the fourth quarter.

With three minutes left in the game, Hawthorne was able to bust the goose egg, taking a handoff around the right end for 24 yards for a touchdown, making it 38-7.

The teams would swap punts until the buzzer sounded to close out WSN’s season.

The Eagles were able to pick up 276 total yards of offense, in large part to Hawthorne’s 112 yards. He ran for 59 on four carries and had 53 receiving on three receptions. Maddox helped out with 77 total yards.

It was a successful run in Williams’ first season, but he looks to build on it and not get comfortable.

“I am proud of the guys,” Williams said. “The goal was to get better every game as the year goes on and I feel that we did that. The kids did a good job controlling what they could, and that’s a good feeling as a coach.”

WSN will lose senior playmakers in Hawthorne and Marvin Maddox. Up front, a hole will need to be filled on the offensive and defensive lines with the loss of the energetic PJ Lovelace. Linebacker Matt Hutchins’ energy and passion will be missed on the defensive side of the ball.

“It’s a big factor losing those guys,” Williams said. “You hate to lose them, really. It’s a part of the game, though. I applaud the seniors for helping our team grow and staying in the fight for the course of their time here at WSN.”