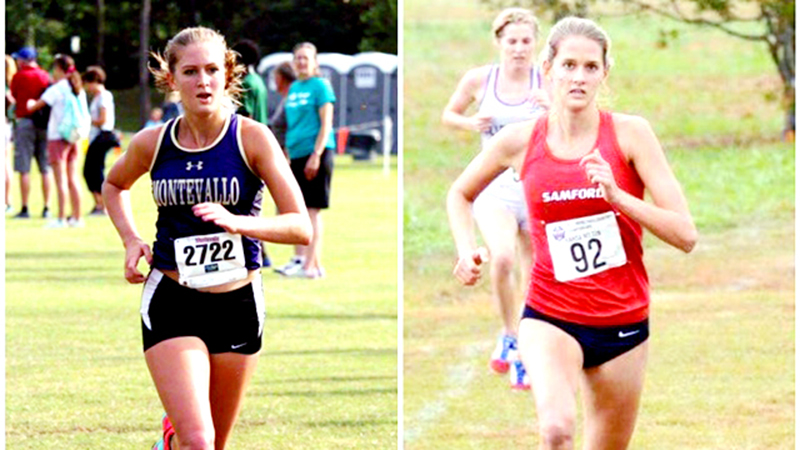 (Left) Katie races for the University of Montavello and (right) Karisa races for Samford University. Both have built lengthy resumes in their times since leaving T.R. Miller. Courtesy photos

Katie and Karisa Nelson have not slowed down, literally or figuratively, since their domination in cross country for the T.R. Miller Tigers.

Katie, who has finished her cross country career at Montavello, had the most decorated career in the history of the school’s women’s cross country program. She competed as an individual in the NCAA Division II National Championship in every year of her career, helping the school advance to the national championship in three out the four years.

“Katie has been a staple of our cross country program for the last four years,” Montavello cross country coach Thommy Barksdale said in an interview. “She has been a team player and wanted nothing more but for the team to win. It has been a blessing to have Katie as part of our progam.”

In her senior season, Katie finished 83rd overall out of 247 runners that were the best NCAA D2 runners in the nation.

In her career at Montavello, Katie claimed 10 individual race titles and was named the conference Runner of the Year in each year of her career. She was also named an All-Conference runner and a USTFCCCA All-Region runner in each of her four seasons.

She holds the top 5k and top 6k times in her Montavello’s cross country program’s history.

She will graduate in May 2018, with another season of indoor and outdoor track to compete in.

Karisa finished her last year of eligibility in cross country at Samford, competing in the NCAA D1 National Championships again. She finished 56th out of the 255 best runners in D1 across the country.

Karisa has also done her part filling up the trophy case in her time at Samford, winning the Southern Conference’s Female Athlete of the Year at the end of last school year.

“Her historic accomplishments have made everyone at Samford proud,” Samford athletic director Martin Newton told al.com. “Not only is she outstanding on the track, but she has also proven herself in the classroom in a challenging major like biochemistry. She is what we want Samford student-athletes to be, and she is the definition of Samford strong.”

She was the first Division 1 national champion in Samford’s history, after winning the women’s indoor mile with a time of 4:31.24, a personal record. In the spring of this year, she registered the fastest collegiate time in the nation in the 1,500 meter run with a time of 4:10.91.

Karisa is set to graduate in December of 2018, and will compete this spring in indoor and outdoor track.

Both of the sisters have aspirations to continue running after their respective college careers are complete.