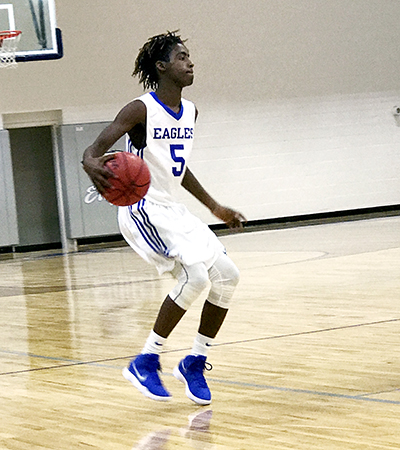 Aquarius Taylor leads the Eagles down the floor, setting up the offense before getting an assist on an easy layup. Travis Tessandori | The Brewton Standard

The JV team opened up the action by knocking off the Bulldogs 39-14. Jacob Bondurant led the way with eight points, followed by Ike Bonam who had seven.

The girls team then locked down J.U. Blacksher defensively, only allowing 19 points in a 41-19 victory.

Head coach Jonathan Farr said that the team will look to continue to work and get better.

“I was proud of our teams effort,” Farr said. “All of the girls have worked extremely hard. The goal is to continue to work hard in practice and improve each game.”

Marisha Fraser, who was a standout volleyball player this year for the Eagles, led the way with 22 points. Freshman Jyra Odom had five points in her first game with the Eagles.

The boys finished off the night with a dominant 56-43 victory that saw them jump out early behind a strong effort from its backcourt. The team led 18-3 after the first quarter.