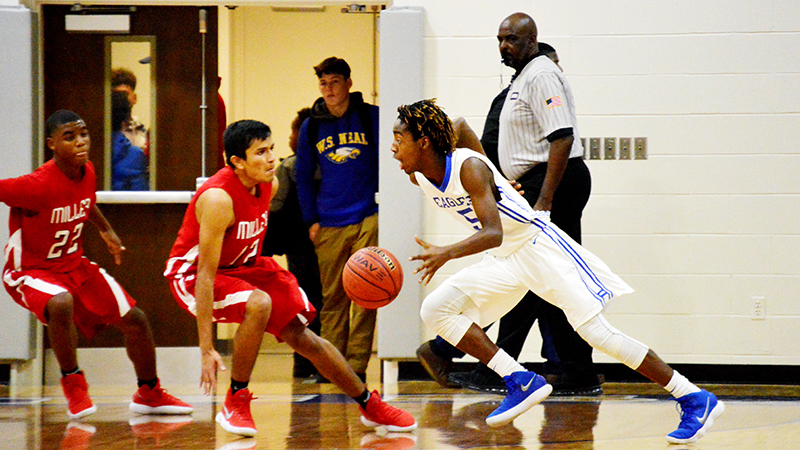 WSN went 2-1 in the Escambia County Tournament to share the tournament trophy.

The T.R. Miller Lady Tigers improved to 8-0 on the season by blowing out its three county foes in the Escambia County Tournament last week to win first place.

In the first game of the tournament against Escambia County, the Tigers had eight players score in a 53-10 win. Kyla Bell Barton led all scorers with 12 points, followed by Janazsia Nettles who had 10. Valeria Samuel had an incredible night with nine steals.

Game two of the tournament saw TRM take a rivalry game against WSN 66-14. Nettles, Barton and Steely Ruzic all scored in double-digts in the effort. Samuel had eight steals for the Tigers. As a team they swiped the Eagles 32 times.

The Tigers finished off the perfect tournament with a 67-12 victory over Flomaton. Nettles recorded 23 points, while Ruzic had 14.

W.S. Neal was able to bring home a share of the Escambia County Tournament championship, as Flomaton, WSN, and Escambia County all finished 2-1 to make a three-way tie for the crown.

WSN was able to win its first game over Flomaton, 45-36. Marcus Page and Jacobey Hawthorne each had 11 points, while Marvin Maddox and Mateo Smith had nine a piece. Page also recorded nine rebounds in the effort.

In game two of the tournament, WSN came out on top of a down-to-the-wire finish over TRM, 51-48. Page had 14 points and seven rebounds, Maddox finished with 13 points, and Hawthorne had 10.

The Eagles only loss of the tournament came in the final game of the tournament against Escambia County, who outscored WSN 20-8 in the fourth quarter to win 57-45. Maddox scored 17 points and snagged four rebounds in the game.

Maddox, Hawthorne and Page were all named to the County Tournament team

The T.R. Miller boys finished the tournament in fourth place at 0-3, after falling to Escambia County, W.S. Neal and Flomaton.

Shiv Patel and Joshua Jolly led the way for the Tigers throughout the tournament, averaging 12.6 and 12 points per game, respectively.

The first game saw Jolly go for 20 points in a 69-38 loss to E.C. He also had four rebounds and three assists in the game.

In game two, a back and forth rivalry game saw the Tigers fall late in a 51-48 loss to W.S. Neal. Patel was hot to open the second half, finishing with 17 points and going 4-10 from downtown. Jolly produced a double-double with 11 points and 12 rebounds in the game.

Game three was a good defensive showing for both teams in a 52-38 loss to Flomaton. TRM held Flomaton to 30 percent shooting, but allowed 12 second chance points on 17 offensive rebounds.

The Tigers have three home games this week, including Straughn, WSN, and Foley.

The first loss came to Flomaton, who defeated the Eagles 42-10. Alyssa Askew led WSN with five points in the matchup.

The second game saw a big first half from TRM to take control early, as they coasted to a 66-14 win over WSN. Aaliyah Askew led the Eagles with seven points. Marisha Fraser had five of her own.

The third game of the tournament was a tough, close loss to Escambia County, 29-27. Aaliyah Askew and and Marisha Fraser led the team with six points a piece.

The Eagles played Monday and Tuesday, and will now have a break after playing five games in six days.

“I’m looking forward to a break in our schedule to give us more practice time,” head coach Jonathon Farr said.