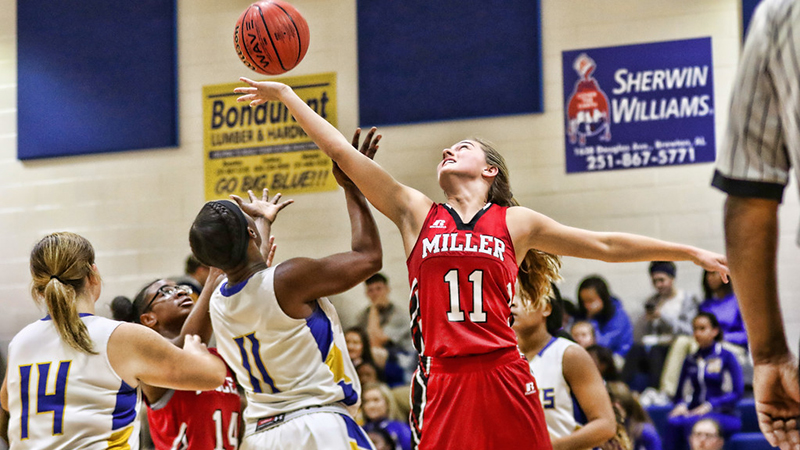 Steely Ruzic had a big week last week, including a triple-double. Ronnie Knowles | Down South Photography

The first win of the week was a 65-23 blowout win at home versus Straughn. Steely Ruzic led the way with 17 points, all coming in the first half.

Valerie Samuel had 15 points of her own. Kyla Bell-Barton and Janazsia Nettles each contributed with nine points.

The second win came on Friday night against W.S. Neal, where TRM blew out the Eagles for the second time in as many meetings. Nine players scored for the Tigers in the 78-21 win.

The Tigers’ were paced by 18 points from Nettles, including seven steals. Bell-Barton and Ruzic were the only other players that scored in double digits. Samuel filled the stat sheet up, accumulating four points, eight rebounds, six steals and three assists. Raivon Ewing chipped in with nine points, five rebounds, two steals and one assist.

The Tigers finished off the perfect week with another blowout win, defeating Foley at home, 65-29.

Ruzic had a huge triple-double in the effort to finish a great week for her individually, recoring 20 points, 11 rebounds and 11 assists.

TRM is now 11-0 and will look to continue its dominance this week as they host the T.R. Miller Invitational that kicks off on Thursday.

The boys’ team fell to 2-6 overall on the year after going 1-2 last week, defeating Straughn and falling to W.S. Neal and Foley.

The victory against Straughn was a tight, back-and forth affair that took overtime to decide a 41-39 TRM victory.

The Tigers’ leading scorer, Joshua Jolly, played a huge factor in the game, scoring 19 points while playing 33 minutes to lead the team. He also had five rebounds and two assists.

Jordan Hails and Shiv Patel had nine points a piece.

On the defensive end, Hails and Cameron Knapp were very active, recording a combined seven steals.

Friday, the Tigers fell for the second time in as many tries to the cross-town Eagles, 55-44. The Tigers were outscored in the fourth quarter by 14 after leading by three heading into the final quarter.

Jolly again led the way for the Tigers, recording a double-double with 19 points and 10 rebounds.

TRM hosted Foley on Saturday to close out its week, dropping a heart-breaker, 41-39.

TRM had 22 turnovers in the contest.

The boys will compete in the T.R. Miller Invitational this weekend.