Lambert to run for sheriff

Escambia County (Ala.) Sheriff’s Office Chief Deputy Mike Lambert announced he will be a candidate for sheriff in the June 5 Democratic primary.

Current Sheriff Grover Smith has announced he will not seek re-election to another term.

“I have the experience,” Lambert said. “I’ve learned and come up through the ranks. I know what it’s like to be a patrol officer, investigator and administrator. I know what it takes to be the sheriff.”

“My family lives in Escambia County, my children go to school in Escambia County,” Lambert said. “This is home. My wife works for the Escambia County School System and my son is a fireman at the Atmore Fire Department.”
Lambert, 48, is a native of Monroe County saying he grew up off of Butler Street at the Monroe, Conecuh and Escambia county lines.

Lambert began his law enforcement career under Monroe County Sheriff Tom Tate in 1991 as a sheriff’s deputy. While working full time as a deputy, Lambert continued to work with the ambulance service.

Lambert then attended the University of South Alabama to become a paramedic, while still working as a deputy sheriff.

Lambert was also the first law enforcement officer in Escambia County to be certified as a clandestine lab technician for taking down and cleaning up methamphetamine labs.

Lambert continued with the sheriff’s office when Grover Smith was elected sheriff.

He was a lieutenant when the Flomaton Police Department’s chief position came open.

“Sheriff Smith and I discussed it and I made the decision to go to Flomaton,” Lambert said.

Lambert served as police chief in Flomaton from 2005 to 2008 while also maintaining his deputy sheriff status.

In 2008, Lambert returned to the sheriff’s office as Sheriff Smith’s chief deputy.

“In July, I’ll start my 28th year in law enforcement,” Lambert said. “This is what I’ve done most of my adult life. I’ve been a deputy sheriff my entire career. I’m raising children in Escambia County like everybody else and I genuinely care about the citizens of Escambia County.”

Lambert said he feels his experience in all phases of law enforcement make him qualified to be the next sheriff.

“There’s a lot more to being sheriff than going out and arresting folks,” he said.

He’s attended multiple classes from working basic crime scenes to homicide. He has training in animal control to narcotic trafficking.

Lambert is also a certified pilot and is certified as a SCUBA rescue diver.

“I’ve had a lot of training, but the main thing is working with people to make our county safe for everyone,” Lambert said. “For most of my career I’ve been in administrative positions and have worked on budgets for sheriff’s offices and police departments.”

He has helped launch community oriented policies in the rural areas of the county like neighborhood watch programs to train people to become the eyes and ears for law enforcement.

He recently launched a program where he and other deputies go to churches to implement safety programs and train members of the congregation.

Lambert also said he will continue to have deputies in the schools and continue the DARE program if elected sheriff.

“The school resource officer program is very important,” Lambert said. “If I’m elected I’ll keep them in the schools to protect our children and our teachers.”
Lambert said the simple fact of having a patrol car parked outside a school and having a deputy walking the halls is a great deterrent to problems.

He said he will also continue a program to monitor registered sex offenders across the county. He said currently two deputies are assigned to that task and check on sex offenders on a daily basis to make sure they are in compliance with their sentencing orders. He said because of that, many sex offenders have been arrested for violating the Sex Offender Notification Act.

He said another key to being sheriff is to stay on top of technology, and he was instrumental in having all deputies fit with body cameras. Deputies now have laptop computers and printers inside their patrol vehicles.

“This allows them to stay out in the community instead of having to come back to the office to do reports,” Lambert said. “They can also print reports on scene and give them to victims.”

“I’ll continue to work with the county commission to make sure we have all the equipment we need to protect the citizens of Escambia County,” Lambert said.

Under Lambert’s direction, inmates are being used to pick up trash along county rights-of-way and recently began a program where inmates are out patching potholes on county roads.

“These things save the taxpayers money, but they also teach inmates about an honest day’s work,” he said. “We have some inmates in jail that have never had a real job. They won’t be here forever and when they do return to society we want them to be productive citizens. It can be as simple as having them get up everyday at 7 a.m. to go to work.”
He said operating a jail is expensive, but he’s worked with Sheriff Smith to implement programs to ease the financial burden on the taxpayers.

“Something like the federal inmate program generates about $100,000 per month that goes directly to the county budget,” he said. “I’ve worked hard to not only keep an allotted amount of federal inmates but to increase those numbers.”
“For the past 20 years I’ve tried to do anything I could, within my power, to help the people of Escambia County,” Lambert said. “I’ve always had an open-door policy and will continue that policy as sheriff. A lot of people already have my cell phone number and call me at all hours of the day and night, but that’s what I’m paid for.” 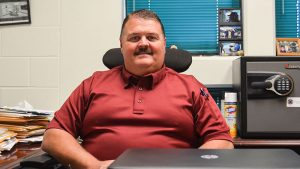 Lambert said if anyone needs him they can call him at 251-727-2575 or email him at ltmlambert@yahoo.com.

“I may not answer the phone when you call, but I promise you I’ll call you back or come see you in person,” Lambert said.

Lambert, his wife Shea and children attend Little Escambia Baptist Church in Flomaton. Lambert is also a member of the Brewton Rotary Club and the Flomaton Lions Club. They have one grandchild.

“I want Escambia County to be safe for your family and mine,” Lambert said. “I’ll do everything within my power to continue to make this county safe for everyone.”