The W.S. Neal girls struggled to open 2018, dropping its two games to Monroe County and Andalusia.

The Eagles were defeated 48-23 by Monroe County last Monday.

Alyssa Askew led the team in scoring with 12 points, followed by Shantavia Autrey who poured in eight of her own.

Friday, WSN put up a fight against Andalusia, falling late in a 39-25 loss. 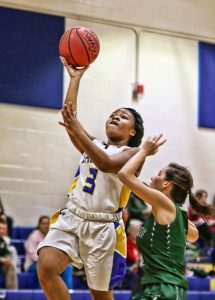 Aaliyah Askew led the scoring with six points, followed by Alyssa and Autrey who score five a piece.

Head coach Jonathon Farr said he was not happy with the losses, but felt his team played better and showed improvements.

“We played better but need to improve in all areas,” Farr said.

The Eagles played at Straughn on Monday, at home against Escambia County on Tuesday, and at J.U. Blacksher tomorrow.