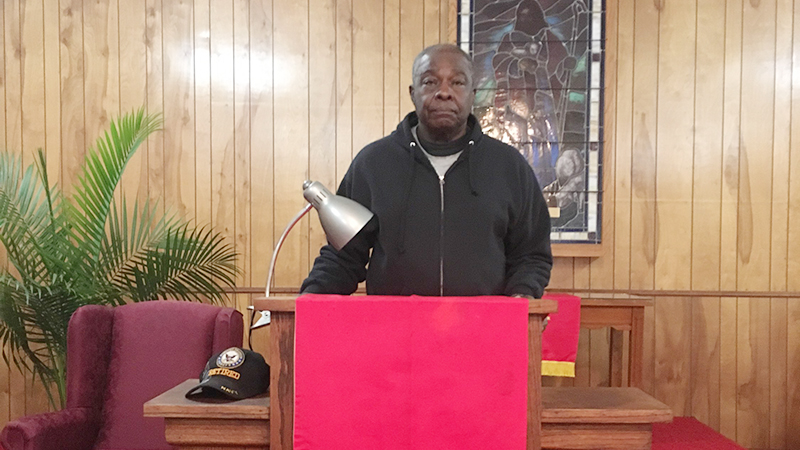 Martin Luther King Jr. once said that “faith is taking the first step even when you can’t see the whole staircase.”

For one local pastor following a vision given to him some years ago by the Lord, that’s exactly what he’s doing.

Pastor Norman Miller, will open the doors for the first time Sunday at Shiloh Ministries.

Miller said that he acquired the property from the United Methodist Church after the former church closed its doors.

“Our first service will be on the 21st,” he said. “I’ve been working in here trying to restore the building, where it can accommodate services.”

Miller said he has worked some five-and-a-half months.

“We added central heating and air conditioning,” he said. “We’ve had a number of services to clean and different people make repairs. It’s been a large undertaking, and we’re not done yet.”

Miller said he will open the doors Sunday without an established membership.

“We have had a number of people commit to come,” he said.

In a sense, he’s operating on a wing and a prayer, he said.

“I’m following God’s vision,” he said. “It was five years ago when I first approached the Methodist Church about getting the building. It went on for several years getting to the point I didn’t think it was going to come to fruition,” he said. “But it did, and I insured it and began the cleanup process. It’s been expensive and time consuming, but I thank God for the help we have had.”

Miller said the vision he has for the church is for it to be a teaching ministry.

“The primary focus given to me focus on our Lord and Savior, Jesus Christ,” he said. “I hope people will leave here inspired and having heard something with clarity and that was uplifting.”

Miller said everyone is welcome at Shiloh Ministries.

“No matter what your social or economic status is, all are welcome,” he said. “We want people to focus not on the building or me but focus on Jesus Christ.”

Miller said he’s a firm believe in that they can be a fruitful ministry.

“My grandfather told me 65 years ago planting corn, ‘We’ve put them in the ground, but I can’t make a one of them come up.’ That’s exactly where we are. We’ve don all we can to the building but we can’t fill it.”

Miller was born in Brewton and reared in Ohio.

After high school he joined the US Navy, where he was in the military during the Cuban Missile Crisis and Vietnam.

After eight years in the military, he worked for the railroad until his retirement.

“With my railroad job, I got to see and meet a lot of people. I have lived and worked in most big cities east of the Mississippi and some west. People are all the same they just have difference approaches.”

The church is located at 1116 East Street in Brewton.