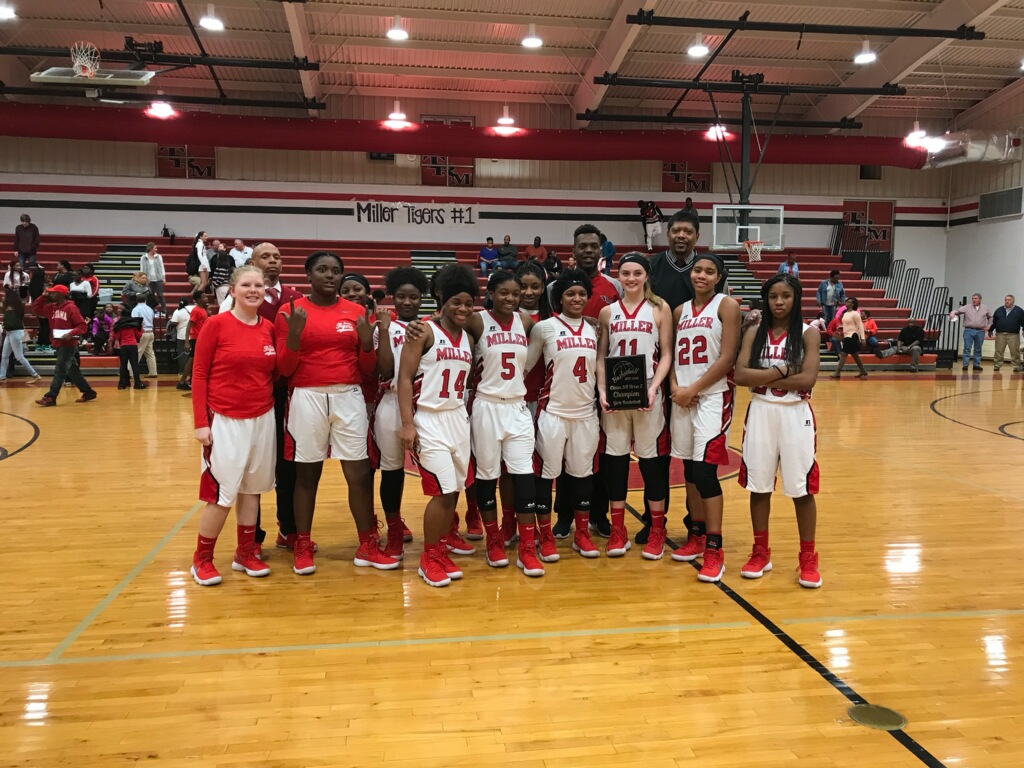 T.R. Miller girls are the winners of 3A basketball as they defeated the Hillcrest Lady Jaguars in a 61-28 victory Thursday night.

The win in this rivalry game extends the Tigers winning streak to 27-0.

Hillcrest Lady Jags came into the gym ready to play as their intensity was set on beating the Lady Tigers.

In the first few minutes of the game the Jags was ahead 4-0, but due to a few adjustments by coach Ronald Jackson the Tigers eventually started taking control of the game.

Coming out in the third The Tigers continued to put the pressure on as they extended their lead to 48-21.

“Hillcrests have a good team, they play hard, they are well coached, and they love the game,” Jackson said. We have to bring our best game if not we will be beat.

“Tyesha Rudolph is a great player and so is Shanesia Watson,” he said.

“We can’t take them for granted it’s a healthy competition from both teams. We are fortunate to beat Hillcrest three times this year,” Jackson said.

Leading scorer Janazsia Nettles led the Tigers by scoring 15 points, one rebound and three steals. The Jags was struggling from keeping Nettles from shooting outside the perimeter. “The game is always exciting because I know and play a little backyard basketball with some of Hillcrest players,” she said.

Point guard Valerie Samuel had 12 points, five rebounds, three steals and five assists. She had a excellent game as well. Samuel paced the Tigers with her quickness and playmaking abilities. “It was an exciting game, we played hard and defense was a major part of this game,” Samuel said.

Kyla Bell-Barton had a great game getting another double-double scoring 12 points, had 14 rebounds and five steals. Bell-Barton played hard in the paint as she kept rebounding and being in the right places to get a steal. “They have a good team and I enjoy playing them because they make me play hard,” she said.

Steely Ruzic had a good game as well. She had a double-double scoring 11 points, had 14 rebounds, three steals and two assists. She said she enjoy playing Hillcrest, because they are very athletic, and well coached. “They bring out the best in me when I play,” Ruzic said.

Ravion Ewing played a great game scoring 5 points and had five rebounds. She was great on the defensive end interrupting the Jags offense the best way she could. She said playing Hillcrest is always a good game, because they are very competitive and a challenge.

Alijah Fountain had 6 points, one rebound and four steals. “Hillcrest came out playing hard I took them lightly,” Fountain said. Vanessa Samuel said they brought out the best in her abilities. “Defense is key, and I look forward to playing them,” she said. The Tigers combined for 40 rebounds and 18 steals.