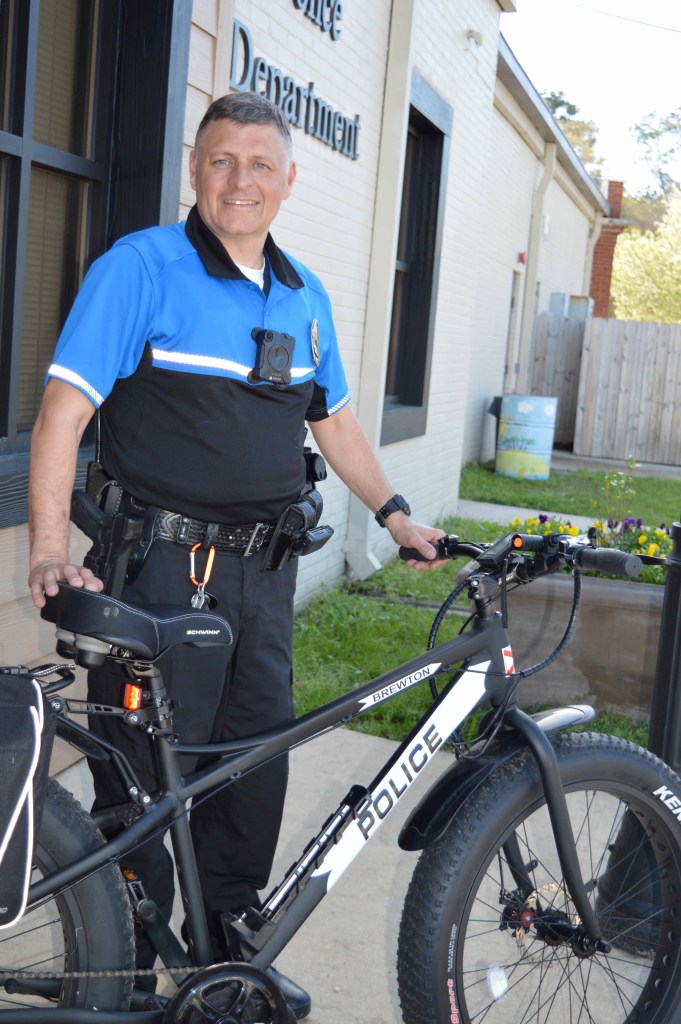 The Brewton Police Department has many services it provides for the city. Not only is it their job to protect the public, but they have many other responsibilities. Officer Heath Madison has been working the Drug Abuse Resistance Education (D.A.R.E.) program for about three years.

Now he and some of his fellow officers have added another tool to be used to fight crime and, at the same time, make their presence known in the community.

Members of the BPD now have three new stylish bicycles that they utilize during public events.

“We have used them, and will use them, during football games, parades, PorchFest, the Blueberry Festival and the Blueberry Drop,” Madison said. “They are so much better than a police car in events such as this. You can maneuver the bikes around crowds.

“They are so much more useful than a car in these circumstances,” he

added. “The bikes are not your local WalMart type. I can still carry

all that I need on my belt or on the bike. They have a motor that helps when they need an extra boost.”

Not only are the bikes useful in crowds, but Madison said that they come in handy to make friends.

“They have helped us get in touch with the neighborhood,” he said.

“Police cars can make people nervous. This is a much simpler way to

get out into the community and put a familiar face to officers.”

The bikes are rotated among the officers who signed up to use them.

Even though there are only three of the bikes, those who want to ride them get their opportunity. Right now Bryan Wesley, Rodney McQueen, Madison and a few others among the 27 officers at BPD are signed up.

“I like riding the bikes,” Madison said. “It all depends on the weather. We had to ride home on the bikes one night when it was raining. I’d rather be in a car then. I personally feel like this is a great thing though. We are excited about mixing up with the public.”

Madison is the son of a long-time Brewton policeman, but he no idea that he would one day be wearing the uniform.

He was born and raised right here in Brewton. He attended the city schools and graduated from T.R. Miller High School in 1991.

He attended the University of Alabama, but after Sept. 11, 2001, he signed up in the military.

“I felt like I should do something at the time,” he said. “I joined the U.S. Army and served during Iraqi Freedom. Serving your country gives you the feeling that you get no other way. I recommend it to others.”

After the military Madison came back to Brewton and worked for a while at Marvin’s. While he was working there, he was approached by Captain Feast Broughton and Assistant Chief Randy Nicholson who asked him to consider coming into the police department. After attending the Police Academy in Selma he went to D.A.R.E. training in North Carolina before coming back to the BPD.

He is married to Lawana Madison and they have four children, Jordan