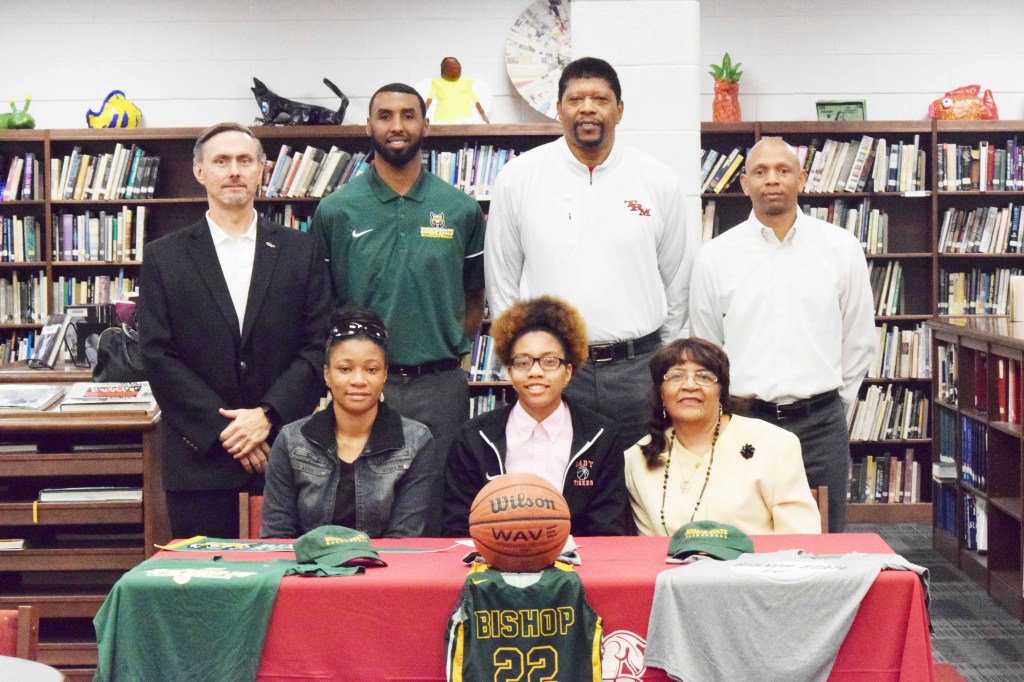 Valerie Samuel and Kyla Bell-Barton both have signed to play basketball at Bishop State CC under the leadership and guidance of head coach Trent Eager.

This is a great opportunity for them as they get to go to the next level playing the sport that they love. They both played outstanding this season as they successfully carried their team to Birmingham this year.

Bell-Barton was awarded as tournament MVP when they defeated Hillcrest in the regional finals in Dothan. Bell-Barton said, “hardest challenge was keeping strong and showing my team that we can do it.”

Bell-Barton said she is thankful to have played for TR Miller, and she said, “If it wasn’t for TRM I wouldn’t be going to BSCC.” She is looking forward to making new friendships with her new team and playing with them. Monique Bell-Barton said, “I’m proud she has become a matured young lady and I am behind her all the way.”

Bell-Barton has been playing under head coach Ronald Jackson since she was in the eighth grade. “Kyla has done everything from studying homework on the table to playing basketball on the court,” Gerald Barton said. “I’m proud of her accomplishments up to now. It’s the best move for her going to Bishop. I want her to shoot for her dream, be the best at what she choose to be and be happy.”

Valerie Samuel played well this season winning regional all-tournament team honors. Samuel has done a great job as she done everything that you would want to see in a point guard. “Thank the Lord for blessing her with the skill, and thank you to TR. Miller for giving her the opportunity to make it to the next level,” Leroy Samuel said.

“It feels great, all the hard work I done to pursue on for the next two years at Bishop,” she said. “She looks forward to meeting new people and maturing with them as she plays for the team, “Leroy Samuel said, “I always tell her if she starts something just strive to be the best and never quit.”

“I want to thank God, my parents, my coaches for blessing me and keeping my head on straight. Samuel said she has a quote that she likes and it’s one that coach Jackson likes to say “If it don’t hurt it ain”t work.”

Samuel is an A/B honor roll student with a 3.3 GPA and she wants to major in nursing. “TR Miller is different as my team opened me up to get this scholarship and I will always love them for that,” Samuel said.

In Samuel’s last game of the season, against Lauderdale she ended the game with 12 points two rebounds, four assists and three steals. “Valerie is real tough, she is second in leadership being my second child, she is eager about doing, she is the ones who never quit, and she gave coach Jackson and her team 120 percent,” Victoria Samuel.

She wants Valerie to just be Valerie as she prepares to go to Bishop. Victoria said, “My motto is always put God first and everything will come behind it.”

They were the nucleus of the team. “Valerie was solid came to work every day and Kyla stepped up her game up this year leading the team in scoring,” Jackson said.

I’m proud of them and anytime you get a chance to go to college should take it and focus.

Valerie is a leader in all aspects of a team. Eager said, “She is an all around young lady who has a chance to be special to our program. We are adding a leader to our point guard spot. She is smart and is a high character kid on and off the floor.”

Bell-Barton is a high motor kid, who is constantly rebounding the ball and defending well. The way she scores and rebound will be great for our program, he said.

Eager said, “My goal is to educate my players on getting their academics so they can graduate and develop them to be better athletes.”