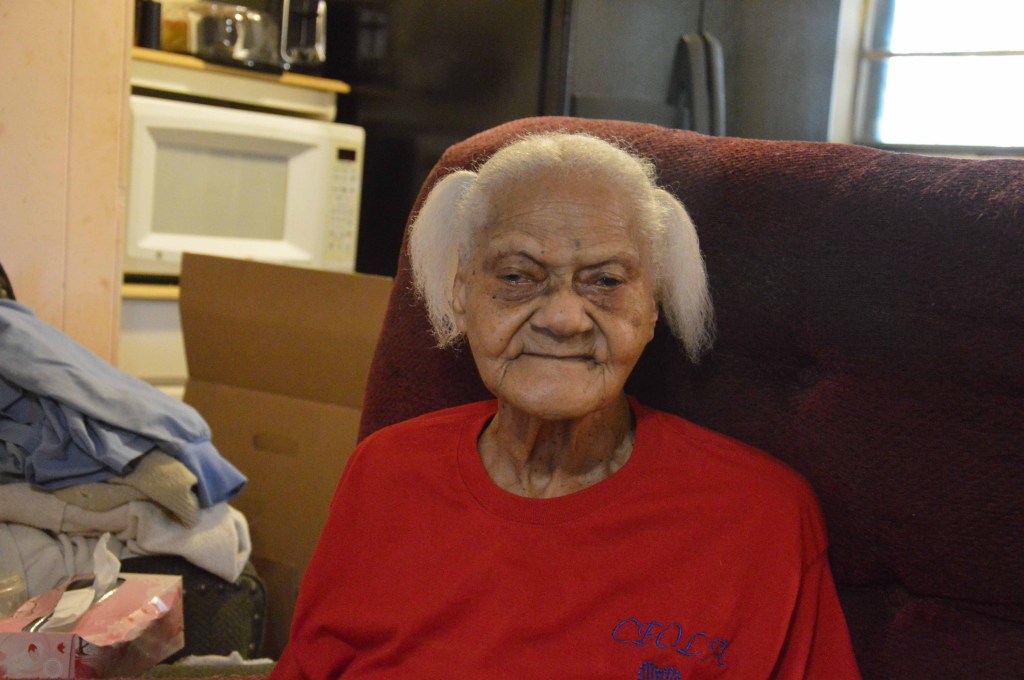 Ceola Lyons was a happy woman Mon., April 23, 2018. She had reached a milestone and she was celebrating her birthday.

“It’s my day! It’s my day,” she sang as friends gathered around her to join in her celebration.

Lyons had a right to be joyful. She turned 100 years old on Monday and she was enjoying herself with her friends and relatives around.

Not only did she sing, she also danced as much as she could sitting in a wheel chair. Later on one of those attending stood up with some difficulty and Lyons proved she could do it better by standing from her chair.

The guests were all remembering the things from Lyons past and things got loud until she reminded them that it was her day.

“Times were hard, but we were happy,” she said. “We didn’t miss what we had never had to begin with.”

They were not able to go to school on any kind of regular basis. The chores around the farm had to be done and as that was their livelihood, the chores came first.

“If I didn’t know God, I wouldn’t have made it,” she said. “No matter how things are, if you have God, you don’t have to worry about anything. I don’t worry and I know that whatever God wants for me is what I want.”

Out of the 12 children in her family, she is the only one left. But she is certainly not without her family.

She had seven children, three of whom are still living. Her health has been pretty good and she had a new report from the doctor saying she was healthy.

“I’ve got good genes,” she laughed. “I got mine but I don’t know about y’all. I came to live in Brewton in 1939. I worked for Earl and Mary Parker and they helped me to qualify for Social Security later on.

“We grew up with no electricity, no running water and had a outdoor toilet, but back in those days, no one had much,” she added. “I am grateful to have lived so long, and as long as God wants me to, I’ll be here. I am ready to go if He wants and I don’t worry about it.”

Yes, Ceola Lyons has plenty to be thankful for. Everyone is not lucky enough to have lived so long and had the love she has from her family and friends.