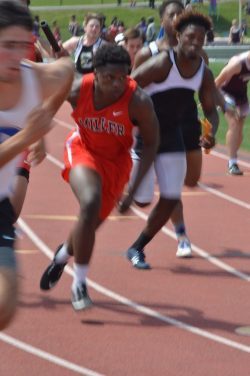 The T.R. Miller Tigers track and field team is making their presence known as they have been performing well all season. Now they are looking to win the class 3A track and field state championship in Cullman AL.

“We started Friday off slow, but I think we will picked up enough before the day ended,” head coach Eddie Brundidge said.

Other results from the Tigers is Sam LoDuca placing sixth and Cobi Godwin placing tenth in the 3A boys pole vault. Aleria Smith came in third place in girls 3A shot put and fourth in girl’s javelin. Olivia Blackmon placed third and Jordan Thompson placed seventh in the 3A girls 1,600 meter-run. The TRM boys placed eighth in the 4×100-meter relay. Raivon Ewing places seventh in the girls 3A long jump.

The Tigers ended the first day of the AHSAA track and field state championship with the girls in second place overall, and the boys came in fifth place. TRM claimed two individual state champions. The girls scored a score of 48 events, while American Christian Academy leads with 53 points. TRM boys placed fifth with 22 points, while American Christian Academy boys also lead for the 3A boys with 63 points.

Right now the Tigers are  still competing and putting in hard work today as they try to perform with a sense of urgency in the championship meet.