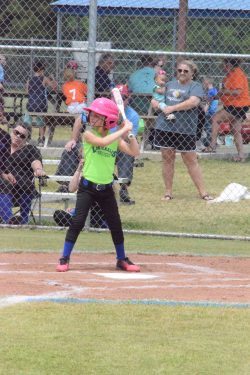 Trinity Pelik had three singles, one double and three triples for Lady Pink. Kam Ewing had one run and one double, Brooklyn Shelly had a single. Mia Montgomery, Alyssa Bolter and Becca Jackson had one single apiece.

East Brewton boys 8-U baseball team Grasshoopers defeated the Blue Rocks 6-5. Brayden Kilcrease for team Grasshoopers had a run with three singles, Will Stephens had three singles, one double and two triples, Maddox Kilcrease had two runs, a single and double. Ollis Johnson had two singles, a triple and a homerun. For the Blue Rocks Damonte Capps had two singles, two doubles, one triple and a homerun. Cam Fountain had two runs and a single and Ethan Fountain had a run and one double.