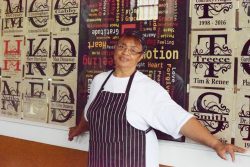 March 26, 2018 was a red-letter day for Lisa Thomas McMillan and her husband, Freddie McMillan.

After years of dreaming about opening a restaurant to serve those who sometimes could not afford a healthy meal, those dreams came true for the couple.

Lisa was a Brewton native and after living out west for a while, she returned to her roots in 1994.

“I saw a lady in the Pic-n-Sav who couldn’t pay for her groceries and I realized that there are many like that,” she said. “I started making a small breakfast and delivering it door to door to several elderly people. That was in the day that few people recognized the fact that we had so many people going hungry in this country. That has changed, and there are lots of groups and organizations that have taken up the problem.”

In the 18 years since those early days, McMillan has walked from Brewton to Montgomery and later from Brewton to Washington, D.C. to draw attention to the plight of the hungry. She has authored a book, “Living Fulfilled: The Infectious Joy of Serving Others,” which relates the journey that has taken her in her quest to help others.

She met and married Freddie McMillan in 2011.

“God sent him to me,” she said. “He believed in what I was doing and he felt the same. I have been truly blessed.”

While cooking for the students at Coastal Alabama Community College, she began to plan and work toward her goal of having her own restaurant so that she could help even more people.

Through the hard work of several volunteers and donations from the public, that dream has come true. It is not a soup kitchen. It is a full service restaurant and no one needs to know what they paid for their meal.

“We have a secluded spot for diners to leave money for their meal if they have it,” she said. “No one is required to pay for their meal, but we do take donations. The other day, I opened the money box and found a note that means so much more than money. “It said. ‘Thank you for the blessing. My family of four didn’t go hungry today.’

“That means so much to mr,” she added. “That is the reason I spend my time cooking and feeding as many as possible.”

McMillan, her husband, and all the volunteers at the restaurant, “Drexel and Honeybee’s” are truly motivated to feed the community. It is located on Lee Street in downtown Brewton.

They are looking for more volunteers and more donations and invite everyone to come and try out their food. If you can pay for it, fine, but if you can’t, don’t worry. You will be welcome regardless

Downs has spent 32 years as nurse

Julia Downs has spent 32 years working as a nurse, and she’s seen a lot in that time. Downs said... read more