TRM will play Wicksburg in first round of playoffs 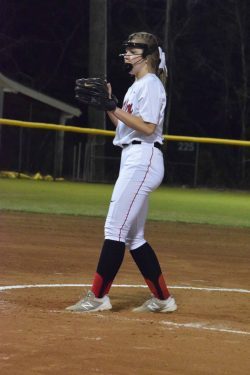 The T.R. Miller Tigers are on a mission and they are doing everything they can to fulfill it. The TRM softball team is area champs and is on a roll as they prepares for their regional playoffs game on Friday in Gulf Shores.

The Tigers will face Wicksburg in the first round of the playoffs at 12 noon, and if victorious they will play again at 6 p.m. for round two. “I am thrilled for our team, because they have worked hard all season,” head coach Chris Baker said.

Despite of the early injuries and tough breaks the Tigers are looking and playing like a playoff team that has a chance to go all the way. Baker said, “We are playing our best softball at the right time, which is now.”

The Tigers started the season off with a 2-8 record, but changed the course of the play to a 21-13 record. “Give all the credit to our players for sticking to the plan and believing in each other,” Baker said. I hope we can continue playing well at regionals.

In their last game against Excel they played a hard-fought competitive game that could have went either way. The Tigers defeated Excel 5-4.

Anna Grace White received the credit for the win for the Tigers. She surrendered four runs on six hits over four innings, striking out two and walking one. Steely Ruzic threw for three innings. Ruzic recorded the last nine outs to earn the save for TRM. Reiss led the Tigers with two hits and four at bats and Mary Madison Brown had a hit, a run batted in and a double.