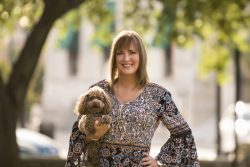 “I have always known that I wanted to teach,” she said. “When I was a little girl, I would gather my stuffed animals around and teach them.”

Pace is a local girl, having been born to Maxine Pace and the late James Michael Pace of Brewton. She attended school in the city system and graduated from T.R. Miller High School.

She entered Jefferson Davis Community College and for a year on a science fair scholarship. She then transferred to Troy University where she received her master’s degree in history.

“Then I received my first surprise,” she said. “I found that history teachers are almost always men who also coach. A woman teaching history was a rare thing. I had a mentor, John Lee, who helped me and I am now where I am supposed to be.”

Pace is not only a teacher. She has a big love for animals.

“I have a dog and I saw the need for help at the Humane Society,” she said. “I can’t bring all the dogs home with me, so I do what I can.”

Pace’s classes, with her help, have recently made some news by collecting dog food for Paws Crossed Rescue. During the fall semester, they collected 821 pounds and they topped that total by bringing in 1,402 pounds of kibble for local animal charities in the spring. Together with Warhawks basketball coach, Allen Gainer, who contributed, the total number of pounds came to 1,533.

She is a proud member of First Presbyterian Church.

“I love the church and the people in it,” she said.