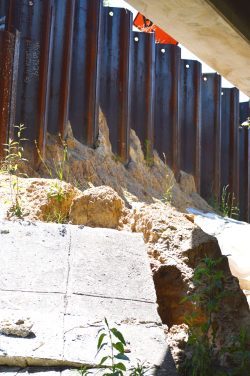 The Alabama Department of Transportation says the old bridge on Hwy. 41 in Riverview is safe.

Questions were presented to The Brewton Standard after last month’s story involving discrepancies found in the deck of the new bridge.

ALDOT is working with the contractor to correct the issues.

Local resident DeWayne Carroll is specifically worried that the bridge will give way.

He said if that would arise, he would have drive out of his way without the bridge. His usual route is only 4 miles.

“Next time we get a rain it’s going to get worse,” he said.

Carroll said it would take him 22 miles to get to his job in Brewton if he has to cut through the woods to Parker Bridge or 33-34 miles to go through Flomaton.

Residents like Carroll have expressed concern over erosion and the overall stability of the old bridge.

“It’s going to collapse with someone on it,” he said. “Just look at the railing it’s showing how much it’s sunk. It keeps sinking down. Not holding it down. When a car hits the hollow spot, someone’s car is going to fall through.

“The replacement was based on a preemptive schedule that is designed to provide a solution before new problems arise to the existing bridge,” Harris said. “It will continue to be used until the unacceptable deck is fixed.”

Harris said ALDOT has one of the best bridge inspection programs in the country.

“We have monitored the bridge and will continue to,” he said. ”The bridge has been inspected in two different ways, — an annual inspection that is very thorough top to bottom and side to side,” he said. “Throughout the new construction, we have been monitoring that.”

Harris said that residents can rest assured, anytime there is a safety issue with a bridge, ALDOT takes immediate action.

“It could be a weight restriction, temporary closure and permanent shoes,” he said.

Harris did not have a timeframe on when the new bridge