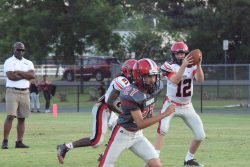 The T.R. Miller Tigers along with the support from their crowd went out and put on a great show in Friday’s scrimmage game.

The Tigers ran some good plays and ran the ball like a championship winning team.

It also showed great signs for new head football coach Keith Etheredge who has won four state championships and one state runner-up during his career as a football coach.

Etheredge said, “I was pleased and saw what I needed to see from our guys on Friday. One of our strengths will be on the defensive end.”

“Everybody did well running, carrying, and holding the ball. Everything is going to be good,” Etheredge said.

TRM will have passing and other types of camps preparing the guys for the regular season in the fall. The Tigers will start workouts June 4.

“The main thing that stood out was that the kid’s played hard and injury free,” Etheredge said, “We are going to be competitive and compete for the regional championship.”

The Tigers are still working on a few things for the starting season, where the Tigers first regular season game will be against Escambia County.