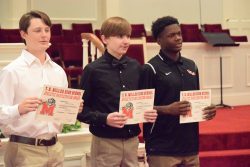 On Tues., May 15, T.R. Miller athletics celebrated their spring sports program. All players were recognized, as well as, supporters of each program.