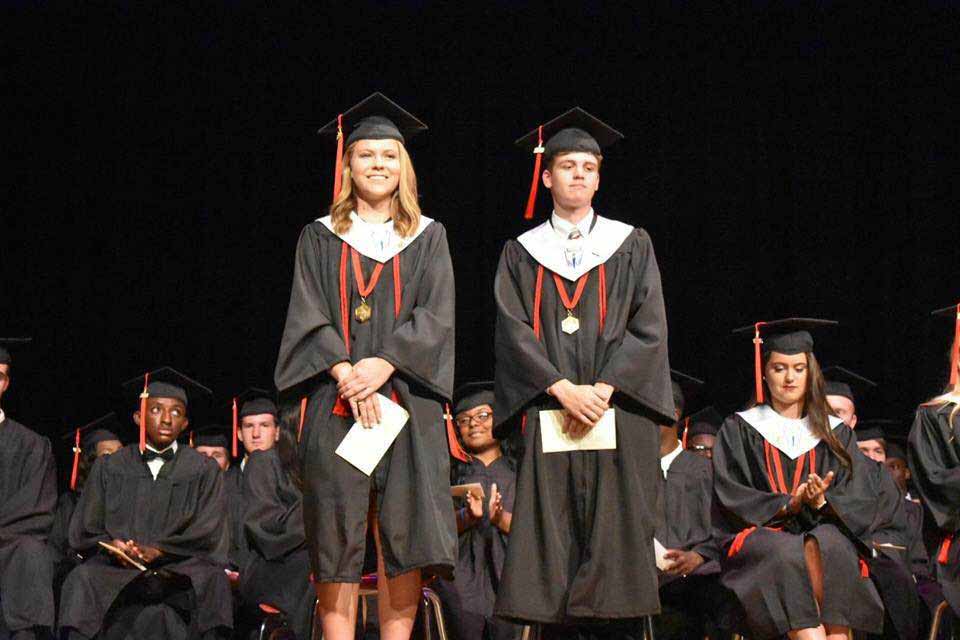 School officials took the GPA out nine decimal points and still couldn’t break the tie, so it was agreed the pair would share the title of valedictorian.

Cave and Reiss plan to attend Auburn in the fall.

Cave is undecided on a major, but Reiss will study accounting.

“I don’t know what I want to do yet,” he said. “I will get up there and see what direction I would like the most. It will be some sort of business, I think.”

Reiss said she has always wanted to be an accountant.

“Ever since I was 7, I wanted to be an accountant,” she said. “Then, I didn’t even know what they did.

Both said they wanted to make good grades and that their parents encouraged it.

Cave encouraged underclassmen to get involved.

“That’s important. It looks good when applying to college,” he said. “And it’s a great experience.”

Reiss said, “enjoy every minute of it. It really does go by fast. When it’s over, you’re like, ‘Where did the time go?”

Cave said his here is his grandfather.

“I’ve always really looked up to my grandfather Earl Cooper,” he said. “He’s always pushed me to do my best and always has advice when I need it and look up to how well he’s done.”

Reiss said her hero is her mother, Dr. Maria Villarreal.

“ She works so hard. You can’t tell she’s seen 45 patients and everyone comes up to me and tells me, ‘you’re Dr. Villerreal’s daughter.’ I just like that.

Cave is the son of Madelyn and Allen Cave and Reiss is the daughter Villarreal and Terry Reiss.