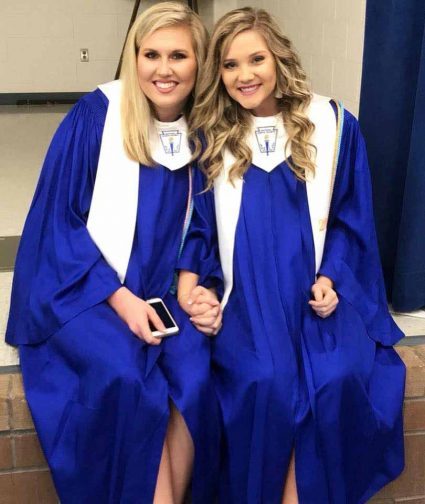 WSN Valedictorian Paige Joyner and Salutatorian Allison Nall are excited about the future.

Joyner has been an outstanding student with her time at WS Neal, being in the band for six years and being a majorette for four years along with being majorette captain her senior year, was president of the National Honor Society, Key Club president and president the of Mu Alpha Theta. She also was a peer group helper.

“My favorite memory will be from band, when we would turn around, say ‘NHS pride’ and the crowd would erupt with excitement. I will also miss seeing all the friends I made throughout the years every day,” Joyner said.

Her hobbies are singing, playing piano, dancing, twirling, hanging out with friends and reading a lot. She plans to attend Coastal Alabama- Brewton for two years and later transfer to Auburn University. She plans to major in pre-veterinary and then go to vet school to be a licensed veterinarian.

“In 10 years, I hope to have been graduated from college and start working in a large veterinarian clinic. Where I will have a family, met all my dreams and well established,” she said.

Joyner said, “The best advice for the upcoming seniors is to work hard, pursue your dreams and graduate because you can do it.”

Nall also plans to attend Coastal Alabama in Brewton and then transfer to Auburn to pursue a career in pediatric nursing.

“I will work for a little while and then I plan to go to UAB to be a nurse practitioner.

“I want to go somewhere where there is a bigger hospital,” she said.

Nall said she chose nursing because of her sister.

“I want to be like her when I get older,” she said. “She’s been one of the biggest influences in my life.”

Nall was active in extracurriculars at WSN and was a member of Mu Alpha Theta, National Honor Society, Key Club, newspaper and yearbook, band, FFA and math team.

Her advice to younger classmen, “make the most of your last year.

Nall said her hero is her mom.

“She’s always been there for me. She’s shown me what a mother should step up and do,” Nall said. “I want to become like her.”

Nall is the daughter of Sandra Nall and Wayne Nall.

Joyner is the daughter of Misty and Jeffery Joyner.