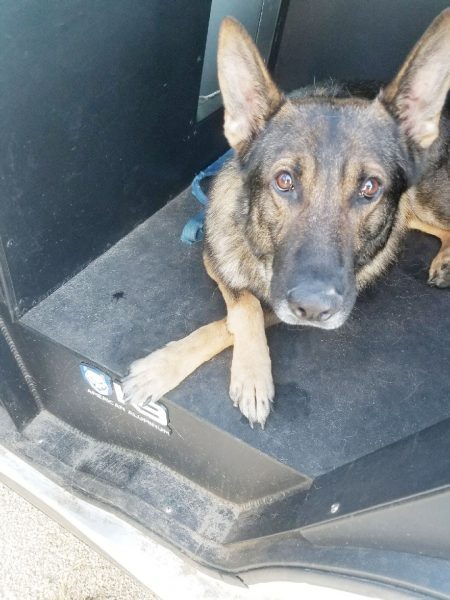 East Brewton Police Department’s K9 Bruiser will receive a bullet and stab protective vest thanks to a charitable donation from non-profit organization Vested Interest in K9s, Inc. Delivery is expected within eight to 10 weeks, according to police officials.

Crawford is originally from San Antonio and joined the Army as an 88M or heavy wheeled operator.

“My first unit was the 40th Transportation Co., out of Fort Lewis, Wash.,” she said. “From there, I went to Iraq from January to December of 2005. Came back and switched over to the 497th Transportation Co., and went back out July 2006-July 2007; transferred to the 1st Calvary in Fort Hood, Texas and deployed back to Iraq in January 2009 until September, when I was medevaced back. I was medically retired in August 2010.”

To help with her PTSD, Crawford has used a service dog to help her, but after the death of her service dog in September, she now is working to get a puppy to bond with and train with a PTDS/TBI service dog that will specifically alert for impending migraines and panic attacks, with long-term training and care costs covered by Crawford.

Crawford said the VA does not provide service dogs, but will provide vet care after a veteran receives a service dog.

“With the mild TBI, I get migraines that cause me to go blind in my left eye,” she said. “Some months, I can go the whole month without a migraine, but progressively I have been experiencing these migraines almost continually. They can last from 45 minutes to several days at a time, and I have had entire weeks wiped out with them. I also have degenerative disc disorder, which limited my ability to move quickly sometimes, and standing up can be especially hard.”

Crawford said a service dog enables her to first know that an anxiety attack or migraine is imminent, so she can prepare or prevent accordingly.

“My first service dog was given through a veteran’s organization that did not properly train and he was not adequately screen for temperament or health,” she said. “This lead to him working for less than two years. I retired him at that point and loved and cared for him through health issues until he died from cancer in September. I feel I am ready for another service dog, this time having done research on which breed, temperament, and characteristics would fit. I am asking for donations to go toward the purchase price of the puppy, transportation costs, and initial training supplies.”

Crawford said she has been searching for a service dog through several organizations for several years.

Currently, Crawford is working to raise $6,000. She has a gofundme account set up for those who wish to help her.