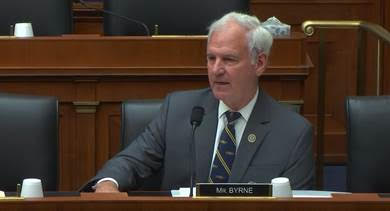 During a meeting of the House Education and the Workforce Committee, Congressman Bradley Byrne (R-AL) questioned Health and Human Services Secretary Alex Azar about the challenges facing Alabama’s rural hospitals and secured a pledge from Secretary Azar to help address the issue.

In Congress, Byrne is working with his Alabama colleagues to solve problems relating to the Medicare Wage Index, which severely hurts Alabama’s hospitals. Alabama has the lowest Medicare reimbursement rate in the country. Alabama hospitals are reimbursed as much as twenty-one percent below the national average and at rates considerably lower than our state neighbors. Click here for more information on the issue.

Byrne recently met in Atmore with hospital officials and community leaders from Southwest Alabama to discuss the Medicare Wage Index and issues facing our rural hospitals.

A transcript of the exchange between Congressman Byrne and Secretary Azar can be found below.

Congressman Byrne said: “We have a crisis in rural America, particularly in my state of Alabama, in regard to our small hospitals.  We’ve lost twelve – count them – twelve hospitals in Alabama in the last few years. We lost the last one three weeks ago in Jacksonville, Alabama. I met with all of my hospitals last week. It is a crisis. We are going to lose more hospitals if we don’t do something.

“Now, there are two big problems here. One, obviously, is health care. As you know, the difference between a 45 minute hospital ride and a ten minute hospital ride is the difference between life and death in many cases. So losing a rural hospital puts the lives of those who live in those communities at risk. Secondly, it is very difficult to bring some of these rural areas back if they don’t have a local hospital. It is hard to attract business and industry.

“The central problem we’ve got is this Medicare Wage Index. I know you had a discussion about this over on the Senate side with the Chairman of the Committee over there. We have got to have you in this with us in a big way. If you don’t, if you’re not with us, we are going to lose a lot more hospitals, and there is no one to blame but us because we’ve got the responsibility. Please tell me what you and I and other Members of Congress can do together about the Medicare Wage Index so that we don’t continue to hemorrhage rural hospitals in America.”

Secretary Azar said: “Congressman, we understand the issue in Alabama and so many other states around the Medicare Wage Index and the impact on rural hospitals. It is a statutory issue, and we will work with Congress and the relevant Committees of jurisdiction that want to propose legislation. We think it needs to be addressed, and we want to work with you on addressing that on a bipartisan basis.”

Congressman Byrne said: “So you would support a legislative fix if we are able to put something together here in Congress? You’d support that effort?”

Secretary Azar said: “We’d work with you, and we believe the wage index needs to be addressed and fixed. It’s been stuck in time, and we look forward to working with you on how to fix that. There are going to be winners and losers unfortunately within the Congress and within states and among areas. That will be difficult. We will work gladly with you on that as we do agree it needs to be addressed.”

Congressman Byrne said: “I don’t think there are going to be losers if we change it more than the losers we are having now. The losers now are poor, rural people. The winners are people in large, urban, wealthy areas. To me, that’s not a hard choice. In fact, I think it is the absolute wrong choice we have made up until this point.  If we really care about poor people in America, if we really care about rural America, we will fix this problem, and we can do it in a way to where everybody’s a winner. Some other places have got too much money now are going to lose a little bit of money, but it is not going to strike them the way the status quo is striking rural America. I appreciate your commitment and support. I look forward to working with you.”

The Brewton Kiwanis Club will hold their annual Blueberry Pancake Breakfast Saturday June 16, 2018 from 7:00-9:00 at the Methodist... read more