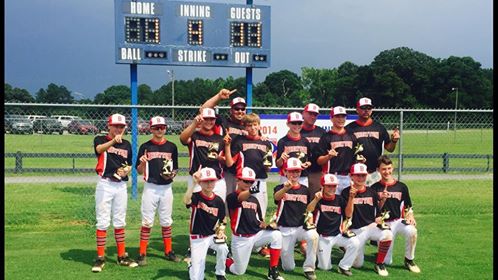 Game 1:  On Friday June 8, Brewton defeated Opp 4-3.  Opp opened the scoring in the top of the first inning on a walk and two singles.  In the bottom of the first, Jim Daugherty reached first on a passed ball by the catcher and later scored on a Thomas Lowery double.  The score remained tied 1-1 through 3 innings.  In the top of the fourth inning, Opp opened up a 3-1 lead after scoring two runs on a walk and two hits.  Brewton responded immediately in the bottom of the fourth.  John Wesley Sessions led off the inning with a solo homerun to pull Brewton within one run.  Thomas Lowery then singled and was replaced by pinch runner Jax Fillmore.  A stolen base put Fillmore at second base and he then advanced to third on a Gavyn Tieppo groundout.  An infield single by John Moore knocked in Fillmore to even the score at 3-3.  Opp threatened to score in the top of the fifth by advancing runners to second and third base with two outs.  John Moore ended Opp’s scoring threat by making a diving catch in right field to end the inning.  In Brewton’s half of the fifth inning, Sam Kelley walked with two outs to give Brewton a runner at first.  John Wesley Sessions hit a line drive to right field that made it to the fence and allowed Kelley to score the go ahead run and put Brewton up 4-3. Brewton pitcher Jim Daugherty shut down Opp in the 6th and final inning to record the win.  Brewton used three pitchers in the game- Sam Kelley, John Wesley Sessions, and Jim Daugherty.  Key defensive plays were made by Jackson Sullivan, Sam Kelly, and Nathan Commander.  At the plate, Jim Daugherty, John Wesley Sessions, Thomas Lowery, John Moore, and Micah Trippe had hits for Brewton.

Game 2:  On Saturday June 9, Brewton defeated East Brewton by a score of 12-1.  Brewton got off to a fast start and scored 6 runs in the top of the first inning.  The big hit was a home run by John Wesley Sessions.  Sam Kelley, Thomas Lowery, Gavyn Tieppo, and John Moore also had hits for Brewton in the first inning.  East Brewton responded in the bottom of the first by scoring a run on two hits.  An RBI single by Carter Hodges plated the only run for East Brewton in the game.  In the second inning, Brewton scored four more runs to take a 10-1 lead.  Brewton hitters with base hits in the second inning included Jim Daugherty, John Wesley Sessions, Thomas Lowery, Gavyn Tieppo, and John Moore.  After a scoreless third inning, Brewton scored two more runs in the fourth inning for the final margin of victory.  A Thomas Lowery homerun started the inning.  Later in the inning, Riley Surles was hit by a pitch and later scored on a hit by Jackson Sullivan.  The winning pitcher for Brewton was Sam Kelley.  Other Brewton pitchers included John Wesley Sessions and Brodie Anthony.  The East Brewton pitchers included Carter Hodges, Jasean Jones, Eli, Stone, and Snoop Paul.  For Brewton, a key defensive play was made by second basemen Tyler Hoomes.  Leading hitters for East Brewton were E. J. Kelly, Carter Hodges, and Cade Campbell.

Game 3:  In the championship game, Brewton pitcher Jim Daugherty held Opp to one base hit in leading Brewton to an 11-1 victory.  Although Micah Trippe had a single for Brewton in the first inning, the game remained scoreless until the third inning when Brewton erupted for 8 runs.  Brodie Anthony led off the Brewton third inning with a single.  Jax Fillmore then walked.  Jim Daugherty bunted for a hit and then Micah Trippe drove in Fillmore.  Later in the inning, Sam Kelley, Gavyn Tieppo, John Moore, and Jackson Sullivan all had RBI singles for Brewton.   Opp scored one run on one hit in the bottom of the third inning to make the score 8-1.  In the fourth inning, the Brewton bats were hot again as they scored three runs to take an 11-1 lead.  The big hit in the fourth inning was an RBI double by John Moore.  Good defense kept Opp off the bases in the fourth inning and the game ended by the ten run rule with Brewton winning 11-1.  Key defensive plays for Brewton were made by Jackson Sullivan, Sam Kelley, and Thomas Lowery.