AG candidate: Justice should be non-partisan 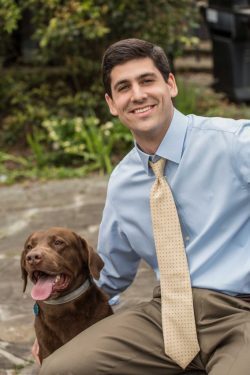 Joseph Siegelman believes justice should be non-partisan, and it’s a concept he’d like to apply to the operation of the Alabama attorney general’s office.

The 29-year-old won the Democratic nomination for the office earlier this month.

“The principle role of the attorney general is the administration of justice,” Siegelman said while making a campaign swing through South Alabama this past weekend. “You cannot apply the law fairly, equally and impartially if you are at the same time executing a political agenda. I have said this a number of times: It should not matter, not for this office, if you have a ‘D’ beside your name or an ‘R’ beside your name.

“To have fair, equal, and impartial application of the law, you’ve got to be an independent,” he said.

The son of former Gov. Don Siegelman said he never aspired to politics. In fact, he really doesn’t like politics.

“But I saw what was at stake in the AG’s race,” he said. “I was disappointed by the wasteful spending and frivolous lawsuits I had observed. I knew the state needed a quality alternative they could vote for in November.”

Too often, he said, Alabama’s attorney generals have brought or joined lawsuits that don’t really affect the people of Alabama.

The opioid crisis is perhaps the issue that most concerns the candidate.

“We are treating it like a criminal justice problem, and not the public health crisis that it is,” he said. “Our prisons in Alabama are overcrowded, largely because they’re being used to warehouse with people with mental illness or drug addiction.”

He rattles the statistics off quickly. Ninety percent of the people currently incarcerated in Alabama are serving time for drugs or drug-related crimes. The prison system is not providing rehabilitation, which contributes to a recidivism rate of more than 70 percent.

“We are incarcerating people who could be in diversion programs, not be in prison housed on taxpayers’ dimes,” he said.

He would like to see drug courts and mental health courts expanded.

“Whenever possible, we should send somebody to a diversion program designed to benefit them and their families. In turn, it benefits the community,” he said.

The goal, he said, is to have productive citizens as a result of diversion or incarceration programs, rather that people who leave with the same issues that put them there.

Siegelman believes as attorney general he could use the resources of the attorney general’s office to hold large, out-of-state corporations accountable for misleading families into believing opioids aren’t as addictive as they are.

“It has cost our friends and families their lives,” he said. “We prescribe more pills per person than any other state in the country, yet we were the last to join a coalition to fight the problem.”

He pointed to a 41-member coalition of AGs from around the country working together to fight the opioid epidemic.

The crisis, in turn, is putting communities at risk of HIV outbreaks, because opioid addicts eventually turn to heroin, and needle sharing.

“There is no single approach that is going to solve this crisis,” he said.

He proposes forming a task force from the AG’s office to develop ways to deal with what he sees as an urgent crisis.

“We may need help from the legislature and the governor’s office,” he said. “It is costing us as a state more money to not address this problem.”

Siegelman also is passionate about the need to look out for the state’s aging population.

“We want to make sure that they are free from fraud and abuse, whether online or otherwise,” he said.

Siegelman is a graduate of the University of Alabama Law School and is the managing partner in the Birmingham office of The Cochran Group. He is quick to point out that, if elected, he would be 30 when he takes office.

“Bill Baxley was only 28 when he became attorney general,” he said. “I think we need that positive energy and drive that I bring to the race.”

Siegelman will face the winner of the July 17 Republican run-off between incumbent Steve Marshall and former AG Troy King. The General Election is Nov. 6.