Brewton finished as runner-up in 12U state tournament 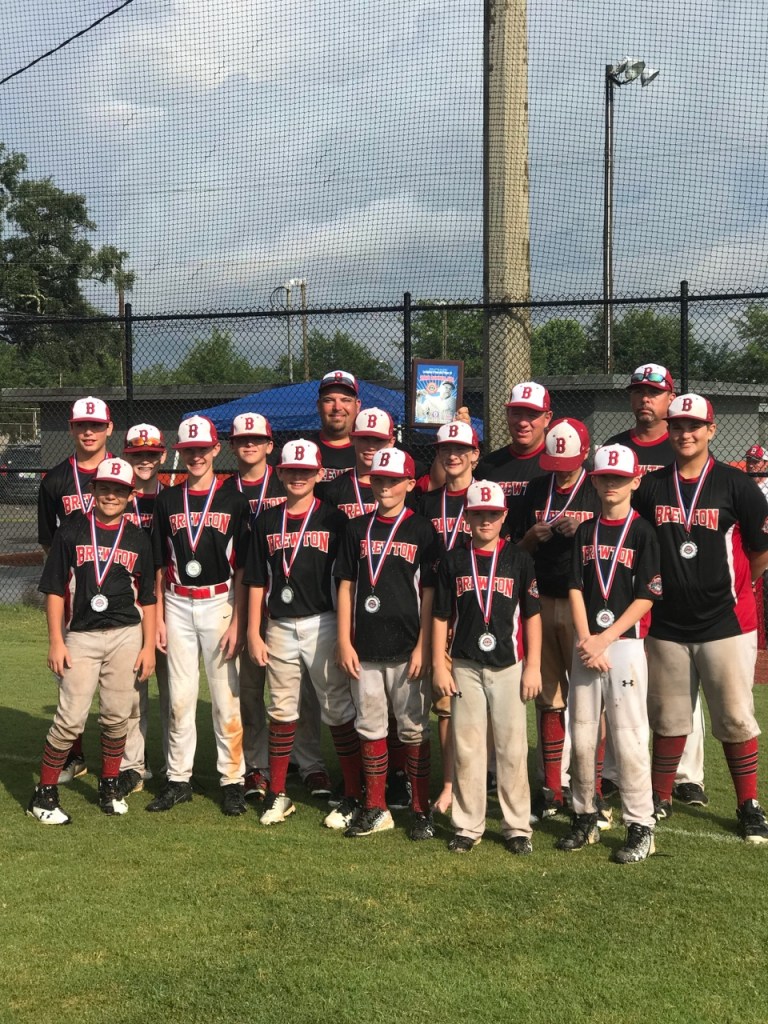 The Brewton 12U all-stars turned a four game win streak into a spot in the championship game of the 12U all-star baseball tournament in Bay Minette this past weekend.  In pool play games Brewton opened with a 5-0 win over Daphne.  Brewton pitchers threw another shutout in the second game against Citronelle to win 3-0.  In the final pool play game, Brewton hit three home runs in beating Phenix City 11-3.  After pool play, Brewton earned the number one seed in the tournament and got a bye in the quarterfinal round.  Brewton played #4 seed Daphne in the semifinals and escaped with a hard fought 6-5 victory.  This set up a championship match against #2 seed Fairhope.  The championship game saw Fairhope hold a 2-0 lead until a big fifth inning propelled them to a 9-1 win.

Coach Jason Tieppo said the highlight of the tournament occurred in the team huddle after the Phenix City game.  The head umpire visited the Brewton team huddle and told the players that he was proud of them for winning, but even more proud of them for winning with class.  Tieppo noted that the umpire’s message was a testament to the character of the boys on the team.  Coach Tieppo also expressed appreciation for the fans that traveled to watch the games, Mr. Steven Dickey and the YMCA, the City of Brewton, and the sponsors.

Pitcher Sam Kelley opened the tournament for Brewton with a strong outing on the mound to lead Brewton to a 5-0 victory over Daphne.  Kelley scattered 3 hits over five innings and recorded 9 strikeouts to keep Daphne off the scoreboard.  Brodie Anthony pitched the final inning for Brewton and recorded the save.   Jim Daugherty led off the game for Brewton with a single, but was stranded at first after the Daphne pitcher recorded three straight strikeouts.  In the second inning, Gavyn Tieppo reached base on an error by the Daphne centerfielder.  Tieppo stole second base and was moved over to third on a John Moore groundout, but failed to score in the inning.

Brewton remained scoreless until the fourth inning when Micah Trippe led off the inning  with a single.  With one out in the inning, John Wesley Sessions then reached on an error.  Thomas Lowery drove in a run when he hit a ball that was misplayed by a Daphne fielder.  Gavyn Tieppo batted next and reached on a fielder’s choice.  The big hit for Brewton came off the bat of John Moore when he hit a two out RBI double down the left field line.  This gave Brewton a 3-0 lead after four innings.  In the sixth inning, Micah Trippe reached on an error and then Thomas Lowery walked to give Brewton two runners with two outs.  Riley Surles was inserted to pinch run for Lowery.  Trippe scored on a passed ball and Surles scored on a Gavyn Tieppo RBI single to make the final score 5-0.

In game two strong pitching again led Brewton to a close 3-0 win in Game 2 against Citronelle.  John Wesley Sessions pitched four innings and gave up no runs on only two hits.  Sessions struck out seven Citronelle batters.  Jim Daugherty pitched the final two innings to earn the save.  Daugherty struck out three batters and allowed no runners to reach base.

On offense, Micah Trippe singled in the bottom of the first inning, stole second base, then advanced to third on a passed ball.  He later scored on an RBI groundout by Sam Kelley.  The Brewton batters were retired in order in the second and third innings.  In the fourth inning, Jim Daugherty and Sam Kelley both reached on errors and later scored on a passed ball and on an RBI single by John Wesley Sessions.  Brewton was again retired in order in the fifth inning with a 3-0 lead.  In addition to pitching well, the Brewton defense was also stellar and never allowed Citronelle to advance a runner past second base.

The Brewton bats came alive against Phenix City in Game 3 as they hit three home runs to earn an 11-3 win.  Jim Daugherty pitched a complete game for Brewton and only gave up three runs on five hits.  Daugherty hit his spots well and gave up no walks while recording five strikeouts.

Brewton again took the lead in the fourth inning when John Moore hit a shot that got under the Phenix City third baseman’s glove and Brodie Anthony followed up with a homer to left field.  Anthony’s two run home run gave Brewton a 5-3 lead after four innings.  In the fifth inning, a Sam Kelley triple to right field, a John Wesley Sessions walk, and a Thomas Lowery single helped Brewton widen the lead to 7-3.  The final margin of victory for Brewton came on a two out rally in the sixth inning when Jim Daugherty was hit by a pitch, Nathan Commander reached on an error, Sam Kelley singled, and John Wesley Sessions hit his second home run of the game.  Session’s grand slam ended the Brewton scoring and gave them a comfortable 11-3 lead heading to the bottom of the sixth inning.  Sam Kelley, John Wesley Sessions, and Thomas Lowery had key defensive stops for Brewton during the game.

In game four in the semifinal game against Daphne, Brewton raced out to a 4-0 lead in the first inning and later held on for a 6-5 win behind another strong pitching performance by Sam Kelley as he pitched five innings and gave up two runs on two hits.  Kelley struck out six Daphne batters.

In the bottom of the first, Jim Daugherty led off and was hit by a pitch.  After a groundout, Sam Kelley walked to give Brewton two base runners.  After a strikeout, Thomas Lowery walked to load the bases and then Jim Daugherty scored on a balk by the Daphne pitcher.  Gavyn Tieppo walked to again load the bases for Brewton.  John Moore followed with an RBI walk that scored Kelley and the bases remained loaded.  Jackson Sullivan got the big hit for Brewton as he hammered a double to right centerfield that scored two runs.  John Moore was thrown out at home on the play to end the inning.  At the end of the first inning Brewton was up 4-0.

Daphne got things going in the second inning as they hit a single and the runner advanced to second after the next batter was hit by a pitch.  The lead runner later scored and Daphne trailed 4-1 heading to the bottom of the second.  Brewton answered in the bottom of the second inning with two runs.  Jax Fillmore and Jim Daugherty were both hit by the Daphne pitcher.  Micah Trippe then reached on a fielder’s choice.  Sam Kelley followed with a hit that was misplayed by the Daphne third baseman.  These events led to Brewton scoring two runs and increasing the lead to 6-1 after two innings.

In the third inning neither team scored.  Brewton threatened after Gavyn Tieppo and John Moore both walked.  Jackson Sullivan batted next and singled.  Two strikeouts ended the scoring threat.  Daphne turned a Brewton error into a run in the top of the fourth inning to make the score 6-2.  Brewton again had multiple runners on in the bottom of the fourth inning.  Jim Daugherty reached on an error, Micah Trippe singled and Sam Kelley then walked to load the bases.  Another strikeout and a good defensive play by Daphne ended this scoring threat.  The Brewton bats were silent in the fifth inning and Brewton had a 6-1 lead heading into the final inning.

Daphne scored three runs in the sixth and final inning to make things interesting.  Brodie Anthony and John Wesley Sessions both pitched in the sixth inning for Brewton.  Daphne used two singles, two doubles, and a Brewton error to close the gap to 6-5.  With one out, Daphne had the tying runner on third base and the go ahead runner on second base.  John Wesley Sessions struck out the final two batters of the game to end it with Brewton winning by a score of 6-5.

In the state championship game against #2 seed Fairhope, Brewton faced a hard throwing left handed pitcher and was only able to score one run on two hits in a 9-1 loss.  Micah Trippe and Sam Kelley had hits for Brewton.

Fairhope opened the scoring in the first inning and scored two runs on a walk and three base hits.  With Brewton trailing 2-0 after one inning, the Brewton pitching and defense tightened up and held Fairhope scoreless in the second, third, and fourth innings.  John Wesley Sessions pitched the first four innings for Brewton and struck out three Fairhope batters.  Nathan Commander and Tyler Hoomes pitched well in relief for Brewton.

Fairhope widened their lead to 8-0 in the fifth inning by scoring six runs on a walk, two errors, two singles, and a home run.  Brewton threatened in the bottom of the fifth when John Wesley Sessions walked, Gavyn Tieppo was hit by a pitch, and Tyler Hoomes walked.  Two strikeouts by the Fairhope pitcher ended the scoring opportunity.

Fairhope scored their ninth run of the game in the top of the sixth inning when a batter walked and later scored on a double.  Brewton relief pitcher Tyler Hoomes struck out two Fairhope batters in the sixth inning.

In a heavy rain, Brewton scored its lone run in the bottom of sixth inning.  Jim Daugherty walked with one out and moved to third on a Sam Kelley double.  Daugherty scored on a passed ball for Brewton’s run.  The game ended with Sam Kelley being tagged out at home plate for the final out.  Defensively, Sam Kelley, Jim Daugherty, Gavyn Tieppo,  Jax Fillmore, and Jackson Sullivan  all made nice plays in the field.