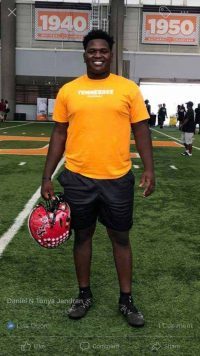 There is more than just coming to football practice everyday, running a few plays, and working out. It depends on how much time that player is willing to spend in the weight room and the hard work he is willing to put in.

T.R. Miller Ricky Samuel is one of those guys who work hard on and off the field. Samuel is going into his senior year at TRM and has been going to a lot of football camps preparing him for the upcoming football season.

He was at the University of Tennessee last week, and was in Knoxville a day before the camp in Tennessee.

Samuel job for the TRM Tigers is to protect the line of scrimmage. Which is an important role for any football team. “I like to work on my position, get stronger and faster,” Samuel said. He also like to workout and play basketball in his free time.

He has been to four camps this summer. In the past years he went to seven or eight, but this year he decided to cut them in half. “The camps usually lasts between three to four hours and having the competition at the camps helps me out,” Samuel said.

His dream is to go to college and play football and after three years go to the NFL. Samuel said, “People know TRM everywhere because we’re known for winning so when I have this TRM gear on it’s strictly business.”

Samuel has committed to go to Troy University when he graduates in the spring from TRM. “Samuel is a great player and even a better young man. He has worked hard, and I think he will be a fantastic addition to Troy State,” head football coach Keith Etheredge said.

Etheredge said, “Samuel has a great attitude and wants to be the best. He will have a huge impact at T.R. Miller this season and he will be a force up front.”