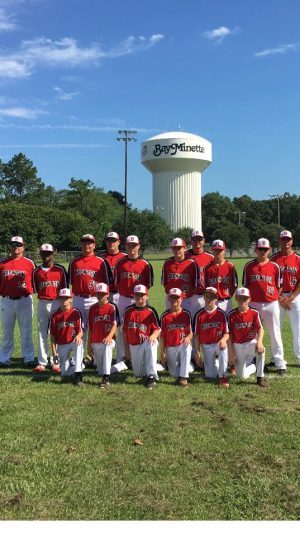 The Brewton 13U all-stars won the 13U state championships and claimed the title as 2018 Alabama Babe Ruth state champions. In doing this, the team earned a berth at the Southwest Regional tourney in Harrison, Ark. July 19-July 23.

The 13U championship game was a pitcher duel until the 5th inning. Dolihite pitched a no-hitter giving up 1 run. Adam White started things off offensively with a hit to left field and Dolihite followed with a hit.

Pettis moved White to third with a fielder’s choice and slid into first to stop the double play. Kelley ended the scoreless streak with a base-hit to left center gap allowing White to get the run. Pettis scored on a passed ball. The score stayed 2-0 until the top of the 7th. Dolihite reached on error, Kelley walked and Qualls got a basehit to score Dolihite. Stinson had a hit that scored Qualls. That gave Brewton a 4-1 lead going into the bottom of the 7th. Due to a pitch count rule Dolihite gave the game to Hart. Hart struck out the first batter, the second flew out to Rose in right field and he walked the third. He gave up a double and a single that gave them a 4-3 score before Hart got a pop up to Rose for the finish.

In game one, Brewton all-stars played Semmes all-stars and defeated them 11-1. Peace and White teamed up for the win in pitching. Each pitched two innings and Rose went 2- for -2, Hart 2- for -3, Peace, White, Kelley and Qualls each had a hit.

In game two Brewton all-stars defeated Sylacauga 10-5. Kelley, White, and Dolihite teamed up for the win on pitching. Dolihite went 3- for -3, Hart, White and Pettis each added a hit.

Hart said, “I’m extremely proud of these boys. I’ve been working with nine of the 12 since February due to the fact that there’s no middle program at T. R. Miller. I was able to get most of the same group during league play with the help of Steven Dickey and the other coaches and it seems it paid dividends to our state tournament. I would like to thank the parents of these boys for all their cooperation and time. Also my coaches that sacrificed their time as well. White, Peace and Kelley. A big thanks to the city of Brewton.”