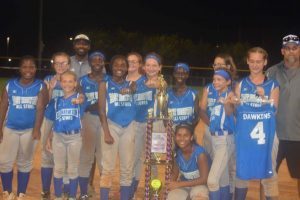 The East-Brewton 12U all-stars played in Gulf Shores for the state tournament last week. East Brewton came up short losing to Gulf Breeze in the championship game 9-1 becoming the runnerup in the Gulf Coast Championship. The East Brewton allstars had played a total of 34 games in the last six weeks, but came up short to reach the World Series.

Teams that qualified to play in the USSSA World Series were the Gulf Breeze all-stars, Walton, from Loganville, Ga, CAYSI from Lafayette, La. Foley as the host, Gilbertown, SBBA Heartz from Slidell, La. and West Mobile all-stars. On Tuesday, East Brewton faced Gulf Breeze and won 2-0. Leading batters were Madison Dawkins, where she went 2-for-1 at the plate. Alonna Bedsole went 2-for-1, Natalee Mealer went 1-for-1 and Jayda Johnson went 2-for-1 with a double. Precious Howard and Johnson pitched.

On Thursday, East Brewton took on West Mobile and won 7-6. Later that day, they took on Gulf Breeze and lost 4-3. Leading batters were Howard going 2-for-1, Johnson 3-for-1, Montgomery 2-for -2 and Bedsole 2- for-1. The loss put East Brewton all-stars in the loser’s bracket. East Brewton battled against Gilbertown and won 3-2 to advance to the championship game. In the championship game Jayda Johnson went 2-for-1 at the plate, Amiyah Odom went 2-for-1, Dashya Montgomery was 2-for-1 and Ty’Yona Wright was 1-for-1.