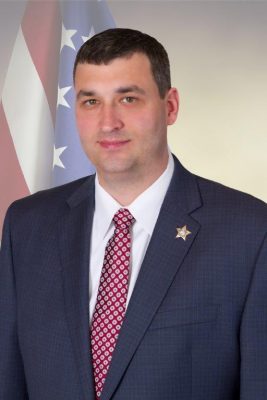 Heath Jackson has announced his candidacy for sheriff of Escambia County, Ala.

Jackson, a resident of Brewton, is running as a republican. He is the son of Thomas Wayne and Terry Sherrer Jackson.

Jackson said in an announcement that through his parents, he learned that hard work and integrity are the cornerstones of success.

Jackson graduated from T.R. Miller in 1999, and began his pursuit of a lifelong dream in law enforcement. He attended the city of Montgomery’s Advanced Criminal Justice Academy, and became a sworn peace officer in the state in January 2000.

Jackson began his tenure with the city of Brewton Police Department as a patrol officer, quickly realizing the need for the active and aggressive stand needed with the rising number of drug-related crimes in the county.

Increasing the scope of his involvement, Jackson spent six years with the 21st Judicial Circuit Drug Task Force investigating all types of crimes from drug investigations, burglary and homicide.

Serving as a task force officer with the Bureau of Alcohol, Tobacco, Firearms, and Explosives for more than four years, Jackson assisted federal law enforcement in the successful arrests and prosecutions of individuals who violated gun and explosive laws.

In 2007, Jackson became an investigator for the Escambia County Sheriff’s Office, Pensacola, Fla., and was assigned to the narcotics division, spearheading numerous investigations in organized crime, drug trafficking and prostitution.

Broadening the scope of his experiences and abilities, he joined the homicide unit in March 2013. In 2015, Jackson was promoted to sergeant and assigned to the Uniformed Services Division.

Jackson has proven he has a calm demeanor in any situation based upon the myriad of experiences requiring strategic and tactical planning. He is the vice president of the Florida Association of Hostage Negotiators, committed to the successful resolution of crisis incidents.

Locally, he is the team leader of the Escambia County (Fla.) Sheriff’s Office crisis/hostage negotiation team.

As a former Escambia County (Fla.) Sheriff’s public information officer, Jackson was responsive and professional, acting in full compliance with the Public Records Law and as spokesperson and liaison to the media and public.

An avid outdoorsman who enjoys spending time with friends and family, Jackson is an active member of the National Rifle Association and Bama Carry. Jackson fully supports the second amendment to the Constitution, the Bill of Rights that enshrines American’s right to keep and bear arms, or weapons.

Jackson has been blessed with numerous accomplishments and received accolades for his involvement with the youth of the county for supporting the Youth Police Academy at Jefferson Davis Community College and Brewton Police Department Citizens’ Police Academy.

With an honest, forthright and no-nonsense approach to public service, he is committed to building on the successes of those who have served before him and continue to focus on ways to improve.

Actively involved in Republican Party politics for several years, Heath was the Chairman of the Escambia County Republican Party from 2012-2014. Giving back to his community and fellow law enforcement officers is a calling that Heath takes very seriously.

“I have seen significant changes in the needs and requirements for law enforcement and public safety in the last several years. I believe these needs will continue to grow as the county prospers. Our community deserves the commitment of the sheriff’s office to eradicate crime, change mindsets, restore hope, tear down walls of division, and open doors of opportunity and fairness. This commitment must be demonstrated every day – not just at those strategically placed moments before elections,” Jackson said. “It is my intention to maintain a professional and courteous office that is prepared to meet any challenge the county may face.”

Jackson knows the importance of conviction, dedication, professionalism and the strength of genuine effort. He understands today’s issues and has the vision to meet tomorrow’s challenges. As an investment in the future of Escambia County, he will be a driving force in ensuring safety and trusts are restored.

“Please join me in moving the Escambia County Sheriff’s Office (Ala.) forward so we can serve you better. I welcome your thoughts and your questions and can be reached on my cell phone at 205-901-1391 or by email at agentheathjackson@gmail.com. I am here to serve the people, I am here to serve you.”