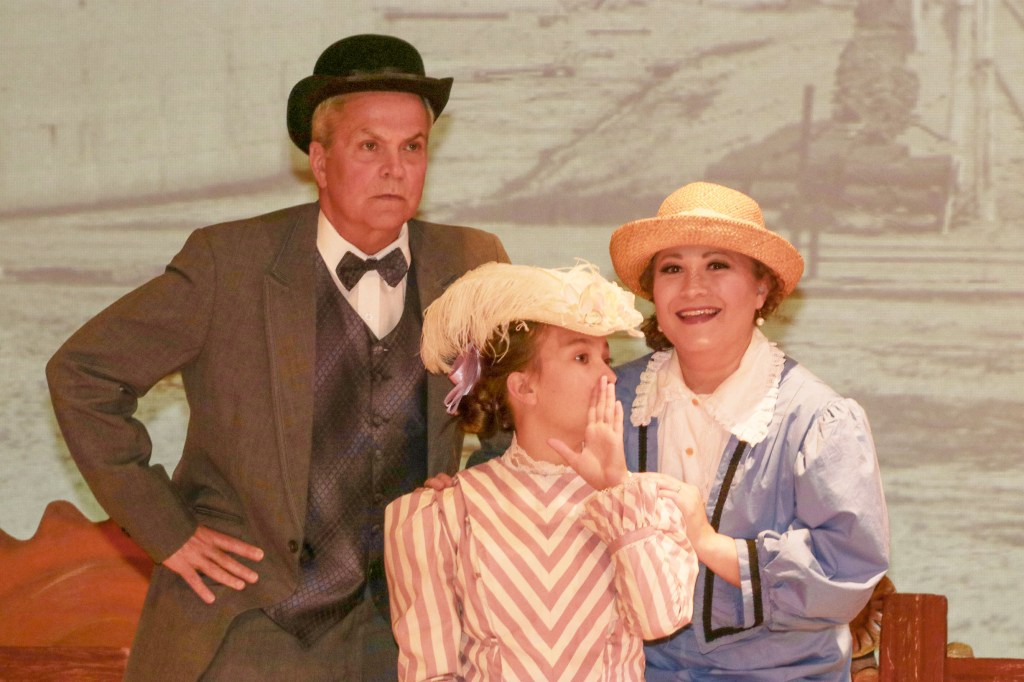 Locals will take the stage the next few days to present Brewton’s Town and Gown’s production of “Chitty Chitty Bang Bang.”

When the curtains open on this year’s production, Courtney Ladnier will play the role of Baroness.

“The process so far has been beyond enjoyable, specifically working with my stage husband Michael Tallon,” she said. “The character work and learning the Vulgarian accent having been challenging in an exciting and fun way.”

“I’ve actually performed several times in Brewton and love joining the community to bring live theatre to local audiences,” she said. “My favorite roles with Brewton Town and Gown Players include Miss Hannigan in ‘Annie’ and Mrs. Gloop in ‘Willy Wonka.’”

Ladnier said she’d drawn to the performing arts because she enjoys being able to tell stories in a creative and unique way.

“The collaborative nature of theatre is one of the most remarkable aspects about this art form,” she said. “It takes so many talented people to bring a production, of any size, to life on stage.”

Tallon is playing the role of Baron aside Ladnier.

“Preparation always starts with the words,” he said. “You learn quickly there is never one way to say something or to act a certain role. Fans fo the movie will notice very early that the dynamic between Baron and Baroness is slightly different in our production.”

Tallon is no stranger to theater.

“I’ve been performing in one way or another since I was 15,” he said. “Some of my favorite roles include Tom Wingfield in ‘The Glass Menagerie,’ Antipholous of Syracuse in ‘Comedie of Errors’ and Will Parker in ‘Oklahoma,’ and getting to be a performer at Walt Disney World in Orlando.

Tallon said that all of the scenes are wonderful because he gets to share the stage with the best acting partner there is – Ladnier.

“We are very supportive of each other throughout our scenes together,” he said. “She really is a rockstar and sharing the stage with her is truly a blessing.”

“Being a huge fan of the original film, when I accepted the role of Truly Scrumptious, I knew I had this amazing opportunity to tell her story,” she said. “For every role I’m in, I do extensive character development and research to be able to tell the story to the audience. Being Truly Scrumptious is one of my childhood dreams come true, and being a part of this incredible production has been one of the best experiences.”

Martens said her first stage performance was a Scout in “To Kill A Mockingbird.”

“When I first walked out on stage as Scout, I knew that being onstage was what I wanted to do,” she said. “I also had the amazing opportunity to attend the Alabama School of Fine Arts in Birmingham.”

Perry Jones is playing the role of Caractacus Potts.

“Every chance I have to share the stage with talented actors makes me a better actor,” he said. “I am constantly learning and this process has allowed me the opportunity to grow personally and as a performer.”

Jones said every role is unique and Caractacus Potts is no exception.

“It has been a joy exploring ways to make an iconic role – made famous by Dick Van Dyke’s portrayal in the film – my own,” he said. “While staying true to the story and its themes, I have worked to create a new Caractacus that is exciting and fresh.”

He earned a bachelor’s degree in theatre from Auburn in 2012, and has played Lumeire in “Beauty and the Beast,”  Joseph in “Joseph and the Amazing Technicolor Dreamcoat,” Bobby in “Cabaret” and LaMarcus in the original musical “Guarding Gold Street” and Willy Wonka in “Willy Wonka.”

Tickets are available online at: www.chitty.brownpapertickets.com, Brewton City Hall, the door (1) hour before each performance. Tickets are $12.