Samuels dedicated to their family and dreams 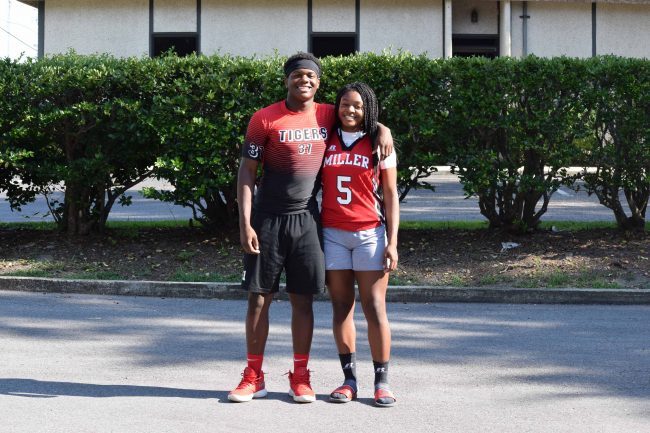 TRM has many athletes and families that are generational athletes; however, the Samuel family is a family that knows the meaning of being a hard-working athlete.

Leroy and Victoria Samuel both played sports when they were in high school. Leroy graduated from Pensacola High School and Victoria graduated from Woodham High School. “We took pride in everything we did and wanted to keep our legacy going,” Victoria said. They have nine kids: Leroy Jr., Alexander, Lavontia, Jesse, Victoria, Valerie, Ke’von and Vanessa Samuel.

Ke’von and Vanessa are the only two left at TRM to keep the family’s sports legacy going. Valerie, who just graduated from TRM, is continuing her basketball career at Bishop State Community College.

Ke’von played for Pensacola High School football team before they came to T.R. Miller. Victoria said, “He didn’t get the opportunity to play like he does now. He showed the coaches at TRM what he had and they were amazed.” His goal is to focus on football and track. He said, “I feel with the team and football staff we have at TRM we have what it takes to go far. He wants to go to college at the University of South Alabama or either Troy University and major in sports medicine.

Vanessa is focused on maintaining her grades and getting to the final four to win the championship in Birmingham. “If I do make it, I want to go farther than my sister Valerie,” Vanessa said. She wants to go to college at the University of Alabama and major in nursing. “Hard work is key,” Vanessa said. When you are in pain, just strive through it. Coach Ron Jackson has taught me a lot of things and without him I wouldn’t be where I am today. “He is one of the best coaches I ever had,” she said. She will also be wearing her older sister Valerie jersey when basketball season start.

The Samuel family is always competitive. They are always competing against each other in something. “I instill in my kids to go run, shoot ball or do something athletic, but at the end of the day my kids are going to be kids,” Victoria said. “I just thank God for the gift he blessed my children with. My husband and I played sports so it was destined for them to play as well,” she said.

As the school year nears both Ke’von and Vanessa have been working out and working hard all summer to prepare for the football and basketball season. “I will continue the legacy of the family by just working out every day and working hard with my buddy Orlando Gandy Jr,” Ke’von said.