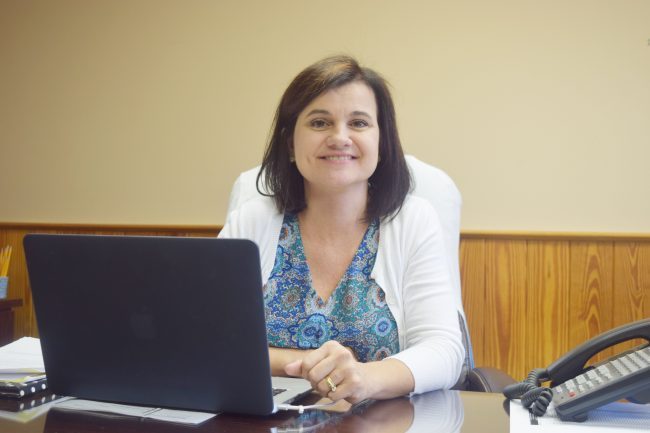 When the schools are back in session in the fall, there will be some changes in the Brewton City School System staff.

One of those changes is already at her new position in the Central Office on Belleville Ave.

Heidi Knapp has crossed the street, leaving her position at Brewton Elementary School, where she has been the reading coach/assistant principal. She has been very busy the past few weeks learning her new position, Director of Programs.

“I’m excited about the new position,” Knapp said. “It’s always good to open new doors and do something new. I will be the new special education coordinator, system testing coordinator and work with the federal programs. Of course that’s not all, but those are the main things I will be handling.”

Knapp was born in Utah and moved to the Atmore-Huxford area when she young. She attended schools in the county system and graduated from Escambia County High School in 1991.

“I knew from an early age that I wanted to be a teacher,” she said. “So all of my school choices were toward that. I attended Jefferson Davis Community College (Coastal Alabama Community College) for two years and transferred to South Alabama. I graduated from there in 1996 with a bachelor’s degree in early childhood education.”

After she graduated, and until she could find something closer to home, she taught in Monroeville and at Miss Molly’s Daycare.

“I then got a chance to come to W.S. Neal Elementary School as a class reduction teacher,” she said. “That just means that after school began that year, there were too many students and had to come up with another classroom.”

That was in 1997 while they were building the new wing. She taught for eight years at W.S. Neal Elementary School and then went to Brewton Elementary School where she worked for 12 years and two years ago, in 2016 she was promoted to assistant principal.

“I always knew I wanted to be in education,” she said. “I grew up in a big family and I liked working with the kids and I thought I would be good at it.”

She got her master’s degree in industrial leadership in 2014.

Knapp is married to Cameron Knapp and they have three children. Katie is 26 and has two children of her own. Tori just graduated from T.R. Miller High School and Cam is a junior at T.R. Miller.

“We live in Brewton and Cameron works at Weeyerhauser in Castleberry, so it works out good for us,” she said. “We have always been very active in whatever the children were doing. I don’t have much free time, but I like to play Bridge.

“I am looking forward to my new job,” she added. “I feel like it will challenge me.”